More for you |
Every 5-star car on What Car?Used test: Maserati Levante vs Porsche MacanNew issue of What Car? magazine on sale nowMost and least reliable small SUVsRevealed: the car makers whose discounts have got bigger since lockdown
Home
News
No change for Jag/Land Rover owners
news

No change for Jag/Land Rover owners 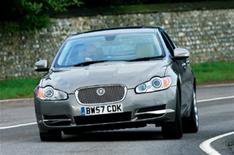 Jaguar and Land Rover owners have been reassured that their rights remain unchanged following the sale of the brands to Indian firm Tata Motors.

The sale had prompted concerns that current or prospective owners of Jaguars or Land Rovers might face changes to their warranty, finance or servicing rights.

However, a Ford spokesman said: 'Customers who have bought new or used cars through dealers will notice absolutely no change in their existing rights.'

The spokesman confirmed that warranties are currently held within Jaguar and Land Rover's business and will continue to be administered by the companies once the takeover is completed.

Parts, components and servicing will also remain under the control of Jaguar and Land Rover, although some of the items bought in will now be supplied by Ford.

As part of the takeover deal, which is expected to be formally completed this summer, Ford has pledged to provide finance for Jaguar and Land Rover dealers for up to 12 months.