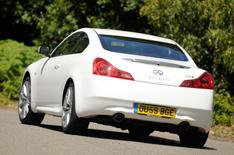 The car proved to be everything Id hoped for, too at least as a thing to drive. Its the best of both worlds: a fine grand tourer when you just want to cover miles quickly and in comfort, but a proper sports coup on the right road.

On the one hand theres the 266lb ft of torque meted out by the sweet-sounding V6, and the unfussy way the auto transmission goes about its work, plus excellent refinement and a fine cruising ride.

Yet with 315bhp waiting to be deployed, four-wheel steering, rear-wheel drive and a sports setting for the gearbox that lets you shift manually using paddles behind the wheel, theres fun to be had. Everyone who borrowed the car praised the way it drove.

Split personality
The only criticisms were aimed at the jerky low-speed gearshifts and a firmness to the ride on battered town streets.

This duality to the cars character was reflected in fuel consumption. Our average over 14,000 miles was 23.9mpg about 10% down on the official figure of 26.7. Four times, though, we beat the quoted average on brisk long-distance cruises that allowed us to stretch more than 400 miles out of a tank. The other side of the coin is that prolonged city driving or regular use of the gearboxs sports setting soon brought the fuel consumption down to the mid-teens.

What was it like to live with?
Buy a coup and you know youll have to accept compromises in practicality. For me, the G37s less-than-generous rear-seat space was not an issue. The problem was the boot or, to be more accurate, access to it.

The luggage area is actually a decent size, but the opening is so narrow that its difficult, if not impossible, to squeeze large bags through it. You have to choose your bags and cases carefully.

Ultimately, its detail like that which let my car down. Take the protective carpet mats that simply loop over a single plastic lug. The one on the drivers side easily came adrift and started to creep up behind the pedals. Not good. Then there were the rattles from the front passenger seat whenever it was unoccupied.

Multimedia frustrations
The DVD-based Multimedia package soon started to frustrate me with some of its poor functionality. It doesnt allow full iPod integration, for instance, and you cant put destinations into the sat-nav using a postcode. Multimedia has since been replaced by a vastly superior hard-drive-based Connectiviti+ package that addresses all of my criticisms. The interiors of the latest cars have been significantly upgraded, too. Serves me right for being an early adopter, I suppose.

Wheel-mounted paddles helped Roger extract maximum performance from the V6Ill remember the car with quiet satisfaction rather than unstinting praise. I always enjoyed driving it, and its dignified good looks continued to draw admiring glances (and quizzical looks) throughout its time with us. Im sure many onlookers thought it was a grey import, due to its rarity.

Run an Infiniti G Coup and youre a member of a very exclusive club so exclusive that I never saw another one throughout my year with the car. We havent even been able to find another owner to back up or contradict our views. Rest assured, though, that if you buy a G37 today youll get a better car than the one Ive just parted company with.

Message to self: dont be so hasty next time.