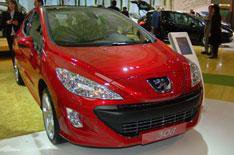 The 308 SW estate car has taken centre stage at Peugeot. It replaces the 307 SW and features a string of improvements over the outgoing car.

There are three petrol and three diesel engines, ranging in power from 95bhp to 175bhp. Peugeot says the updated engine line-up means that the 308 SW gives fuel savings of up to 10% compared with its predecessor.

The car has a panoramic glass roof that extends beyond the heads of the second row of passengers and is 27% larger than the one on the 307 SW.

The three seats in the second row are all individual so that they can be removed easily. A two-seat third row turns the car into seven-seater.

With the second row of seats in place, the car's boot capacity is 674 litres; without them, the capacity is 2149 litres.
Access to the boot for smaller items is made easier by an opening tailgate glass.

Prices are expected to start from 15,500 when the car goes on sale in the UK in June.

Styling upgrades over other 308s include a rear spoiler and lower front bumper. The suspension has been lowered, too. Inside, there's aluminium for the gear knob and pedals, as well as a different steering wheel design.