Pollution-free taxis on the way? 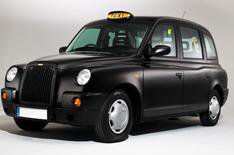 A fleet of zero-emission taxis will be on duty in London by the time the Olympic Games arrive in 2012.

The scheme is part-funded by the Government's Technology Strategy Board, which recently allocated 23 million for 16 low-carbon vehicle development initiatives.

The taxis will be capable of speeds of up to 75mph, with the fuel-cell powertrain providing better acceleration than the standard car's. No details of the cars' range have been announced, however.

The vehicles will top up their hydrogen tanks at central depots in a refuelling process that will take only a few minutes.

Chief executive officer at Intelligent Energy, Henri Winand, said: 'With the price of oil continuing to rise and CO2 emissions increasing, we need to introduce alternatives to the petrol and diesel engine.

'Fuel cell vehicles offer considerable emissions savings, and produce no pollution at the tail-pipe. This project is central to our plans to supply zero-emissions power systems to the automotive market.'