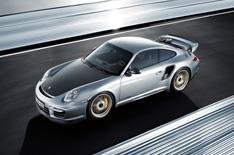 This is the awesome new Porsche 911 GT2 RS that will be unveiled at the Moscow motor show in August.

Porsche's fastest-ever road car
With a 612bhp twin-turbocharged 3.6-litre six-cylinder engine that will blast the car from 0-62mph in just 3.5 seconds and on to a top speed of 205mph, the 911 GT2 RS is the fastest and most powerful road car the company has ever produced.

The key to such impressive performance figures is that, compared with the previous GT2, the new RS has an extra 89bhp, but weighs 70kg less. To do that, it gets aluminium suspension parts, polycarbonate rear and side windows, and lightweight door panels.

The engine drives the rear wheels which are clad in tyres that have been specially developed for the car through a six-speed manual gearbox. To keep all that power in check, the car is fitted with Porsches ceramic brakes, as well as the companys Adaptive Suspension Management and Stability Management systems.

Unique styling
To distinguish it from the previous GT2, the new model has matt-black carbonfibre components outside and lightweight bucket seats, also coloured black, but with contrasting red Alcantara on the centre sections, as well as on the roof lining, steering wheel and handbrake.

Porsche will make only 500 units of the 911 GT2 RS, and after its official unveiling at the Moscow motor show in August, the car will go on sale in the UK in September, with prices starting at 164,107.

Also included in the cars price are a course at the Silverstone racetrack which will help owners explore the full potential of their car and a Thatcham-approved vehicle tracking system.