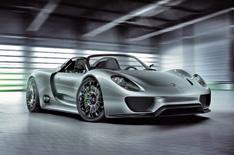 Porsche is to put its stunning 918 Spyder into production, the company has confirmed.

Revealed as a concept car at this year's Geneva motor show earlier this year, the 918 Spyder is a two-seat, ultra-high-performance, mid-engined sports car with plug-in hybrid technology.

Porsche claims it's capable of 94mpg and CO2 emissions of just 70g/km, but can blast from 0-62mph in just 3.2 seconds and around the Nurburgring in Germany in less than 7.5 minutes.

Michael Macht, president and chairman of the board of management of Porsche said: 'Production of the 918 Spyder in a limited series proves that we are taking the right approach with Porsche Intelligent Performance featuring the combination of supreme performance and efficient drivetrain concepts.'

Further details about the 918 Spyder will be confirmed soon, but the concept car was powered by a V8 engine delivering more than 500bhp, and three electric motors with an overall output of 215bhp.