More for you |
Best luxury SUV dealsCar market begins to recover in JuneDo I have to pay extra road tax on my new car? True MPG: most and least efficient cars revealedConfessions of an AA technician
Home
News
Practical imperfections, but plush
news 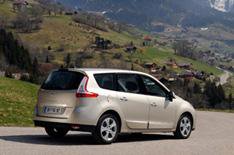 Practical imperfections, but plush
Anyone who takes the 'MP' part of MPV to heart might be a little disappointed with the Grand Scenic's seat folding arrangements.

Seats six and seven disappear neatly into the floor, but seats three, four and five don't. Instead, they fold in pretty much the same way as the original Scenic from 1996 the backrests fold flat (as does the front passenger seat), they tumble forward or, with a bit of a heave and head-scratching, they can be removed altogether. Other cars do it much better.

Where Renault really trumps its rivals, though, is on quality the new Grand Scenic is plusher than rivals with a good-looking, quality interior. Cabin plastics work their way downward from a positively mattress-like squishiness on the dashboard top to a more everyday grade around the seat bases.

Splashes of chrome lift the cabin, too, as does a rather fancy computer-style thin-film-transistor display screen with natty graphics and background colours that you can play around with. Renault doesn't fit it to the entry-level car though.