More for you |
Why I bought a BMW i3: owner reviewShould a high-mileage driver buy an electric car? New Renault Zoe vs used BMW i3: which is best?Used test: BMW i3 vs Volkswagen e-GolfLondon's Ultra Low Emission Zone: everything you need to know
Home
News
Readers review the BMW i3 electric car
news 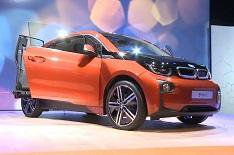 Just 24 hours after the BMW i3's global unveiling, What Car? readers were given the chance to get up close to the all-new electric car at a special preview in London.

The styling of the i3 is radical compared with that of other BMWs, but it maintains some familiar design cues such as the twin-kidney grille. However, it's taller than most other small cars and is about the same height as BMW's X1 crossover.

The BMW i3 will be available as either a fully electric model, or as a range-extender with a small petrol engine on board that's used solely to recharge the battery pack.

The all-electric version has a range of between 80 and 100 miles in normal driving, although this increases when the Eco Pro modes are used. The range-extender adds around 80 miles to the distance possible on a single charge.

The i3 can be recharged from zero to full in around eight hours using a conventional household socket, or in around four hours if you have a special charging box installed at home. Ultra-fast DC Rapid Charging that can take the i3 from zero to 80% charge in around half an hour will be available as an option.

The fully electric i3 will cost 25,680 after a Government grant of 5000 is taken into account, and it'll be sold through a UK network of 47 specialised BMW dealers. The range-extender model costs 3150 more than the EV version, starting at 28,830.

BMW has also confirmed that the car will be available on a three-year contract hire deal; after a deposit, customers pay between 369 and 480 per month depending on the version they choose.

Watch the video to find out what our readers thought of the BMW i3 at our exclusive preview.

BMW i3 prototype driven: our verdict >>