* Espace replacement due in 2014 * New car will be lower and wider * Renault EVs to have new logo... 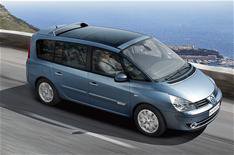 A replacement for Renault's Espace MPV is due in 2014 and it will be lower, wider and maybe even longer than the model it replaces.

According to Axel Breun, Renault's director of concept- and show cars, the dashboard will be more orientated towards the driver and will have traditional dials rather than the current digital centre-dash display.

'The driver needs to be made to feel special with a different view to the passengers,' Breun told What Car?. 'After all, it's usually the driver who has paid for the car! '

Breun also conceded that it is a 'huge challenge' to keep in-car electronics up-to-date. He said most consumer electronic products date very quickly, which is why Renault is working with the likes of TomTom. Breun expects other relationships with companies such as Google (for Android), Apple, Microsoft or Nokia.

Future Renault design
Renault showed off its sensational Dezir concept sports car at the Paris motor show last year. Two more concept cars are due to be unveiled at the Geneva motor show next month - including the Captur.

Breun said that future Renaults will have a curvier design and be more 'voluptuous', although Renault's electric vehicles will feature more lines to accentuate light weight. EVs will also feature a version of the Renault diamond with a blue 'tinge'.