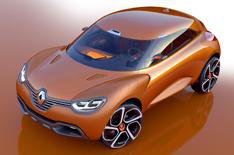 This is the Renault Captur concept car that will make its debut at next month's Geneva motor show.

The sporty crossover concept car continues Renault's new design strategy with its 'flowing and athletic body' designed to mimic a sprinter on the starting blocks, according to its exterior designer, Julio Lozano.

On a more practical note, the crossover concept is fitted with a hard convertible top, which, once removed, means the urban coupe is turned into a convertible with genuine off-road abilities.

The front seats are anchored to the centre console to give them impression that they are floating in mid air. The rest of the cabin is stripped down to essential equipment only, with door castings and the dashboard formed from a translucent material to create the appearance of a 'second skin'. Various shades of orange lighting then pulse from behind this second membrane.

The rear of the cabin allows for two passengers, and an area lined with three layers of rope to create a storage space that can be configured to secure various loads, or as hammocks for relaxation.

Performance comes from the 158bhp Energy dCi 160 twin-turbo engine. Renault says the Captur would have a top speed of 130mph, with CO2 emissions pegged to just 99g/km.

Farewell to the Renault Captur