More for you |
Every 5-star car on What Car?Used test: Maserati Levante vs Porsche MacanNew issue of What Car? magazine on sale nowMost and least reliable small SUVsRevealed: the car makers whose discounts have got bigger since lockdown
Home
News
Scottish drivers lose their cool
news

* Scots are most grumpy drivers * Northern Irish most relaxed * Yorkshire drivers on the right road... 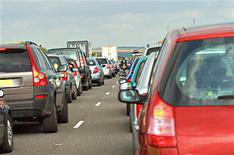 Scottish drivers are most likely to lose their cool while behind the wheel, according to a survey by sat-nav maker Navigon.

Nearly half of Scots admitted getting hot-headed when caught in a jam, while 87% admitted swearing at another motorist.

It's not just fellow motorists who make the Scots grumpy, either 10% of drivers from north of the border admitted they find passengers who talk to them annoying.

Irish are most relaxed at the wheel
The survey also revealed that drivers in Northern Ireland were most relaxed while behind the wheel, with more than 30% of them packing 'chill-out' music for long trips.

The poll also revealed, rather unsurprisingly, that 60% of Londoners would like to see less traffic on the capital's roads.