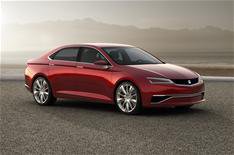 Seat has revealed the IBL, a concept car that's expected to influence the next generation of Exeo.

The concept car is a plug-in hybrid, with what Seat describes as its 'arrow nose' at the front and a five-sided, arrow-head grille. There are striking LED lights front and rear and the car sits on huge 20-inch alloy wheels.

The IBL has three driving modes Travel, Sport and Efficiency

The interior is suitable futuristic. The main display on the dashboard, behind the steering wheel, is fully digital and can be programmed to suit the driver's preferences. Information can be presented in either analogue dials or as a digital read-out.