More for you |
Most and least reliable family carsWhat to do if you put the wrong fuel in your carVolkswagen Passat GTE long-term test reviewNew issue of What Car? magazine on sale nowTrue MPG: most efficient SUVs
Home
News
Seat IBX
news 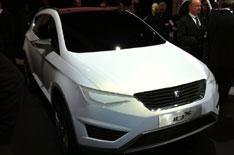 Seat is the latest manufacturer to tap into the hugely popular crossover sector with this IBX concept, on show for the first time here at the Geneva motor show.

Following on from the well-received IBE concept of last year, the IBX is an evolution of Seats new design language in a completely different segment.

The two-door IBX is shorter and narrower than a Ford Kuga, however Seat has attempted to retain a purposeful and powerful stance by giving the car chunky wheelarches and LED headlamps.

Numerous Seat design cues are also evident, such as the two creases running from the front wheelarch to the door, and over the rear arches.

Large air intakes with incorporated foglights dominate the lower sills, with a rear diffuser below a sharply angled rear screen.

Seat claims the IBX could be propelled by any engine from the current VW line up and coupled with an electric motor, which would provide sole power for up to 25 miles.

The IBX is designed to be front-wheel drive, however Seat says a four-wheel-drive version could also be offered.