Home
Slideshow
Security: New cars that can be stolen in less than 30 seconds
slideshow

Security: New cars that can be stolen in less than 30 seconds

New exclusive What Car? research shows that some of the latest and most popular models with keyless entry can be broken into in just seconds. Here, we list the cars that can be nicked in the time...

Car theft rates in England and Wales have reached an eight-year high, with more than 106,000 stolen last year alone. 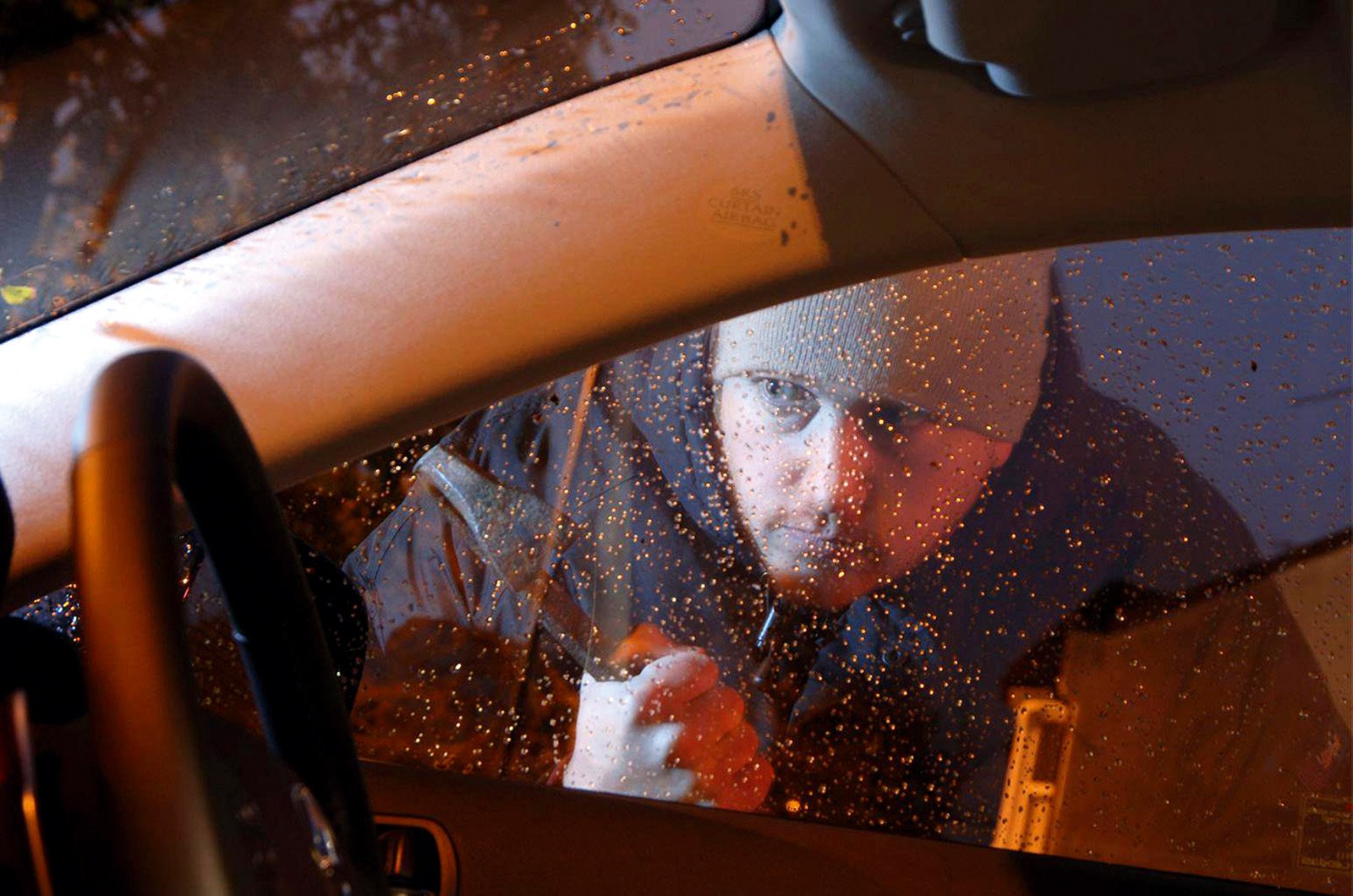 Vehicles fitted with keyless entry and start systems are being targeted by thieves. Criminals using specialist tools can capture a key’s signal and relay it to another device next to the car, allowing them to enter and start the vehicle.

What Car? tested seven different models, all fitted with keyless entry and start technology. Our car security experts were able to break into a number of models within a matter of seconds. Let’s take a look...

Slideshow story – click the right-hand arrow above to continue: 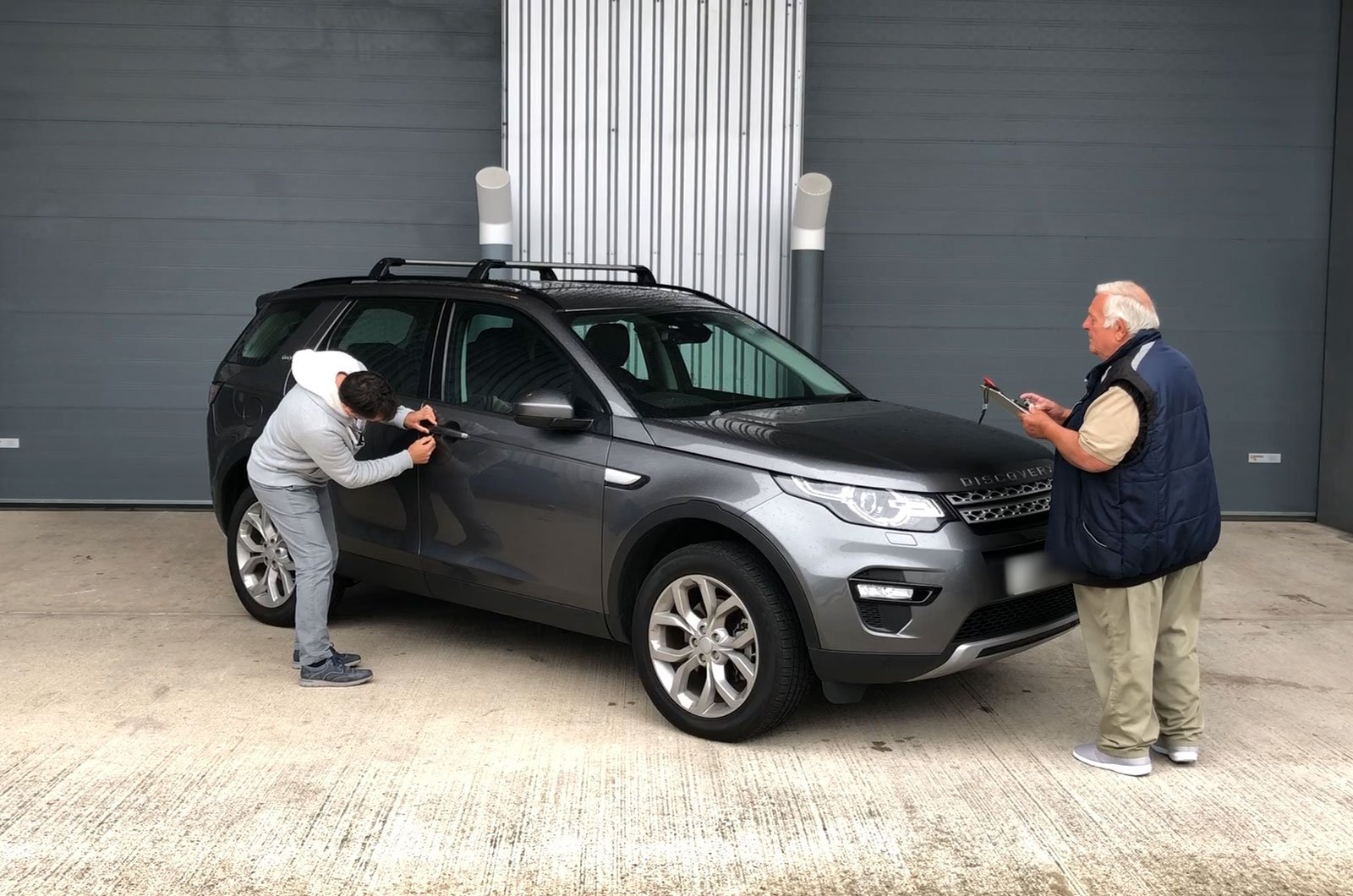 To find out how vulnerable keyless entry and start systems make cars to theft, we asked two security experts – Ron Cliff (left) and Voskan Pehlivanjan from Edilock – to use any non-damaging technology to gain access to seven cars with keyless entry.

In five instances, our fake thieves used a form of entry that’s often referred to as a relay attack. It involves two electronic devices – one to pick up the signal from the key fob and a booster unit that repeats the code next to the car door to open it. On two of the cars, they used a lock-picking device to unlock the doors.

We measured the time it took them to gain entry to each car and the time to start the engine, and combined these two to give us a total theft time so we could compare them. In general, keyless entry fobs have a range of five to six metres, so one of the scanner units has to be no farther than this from the fob. The distance between the two scanners can be up to 50 metres, though, so don’t think that your car is safe just because the keys are a fair distance from it; if a thief can get close to the fob, the car is vulnerable.

Let’s take a look at the cars we tested: 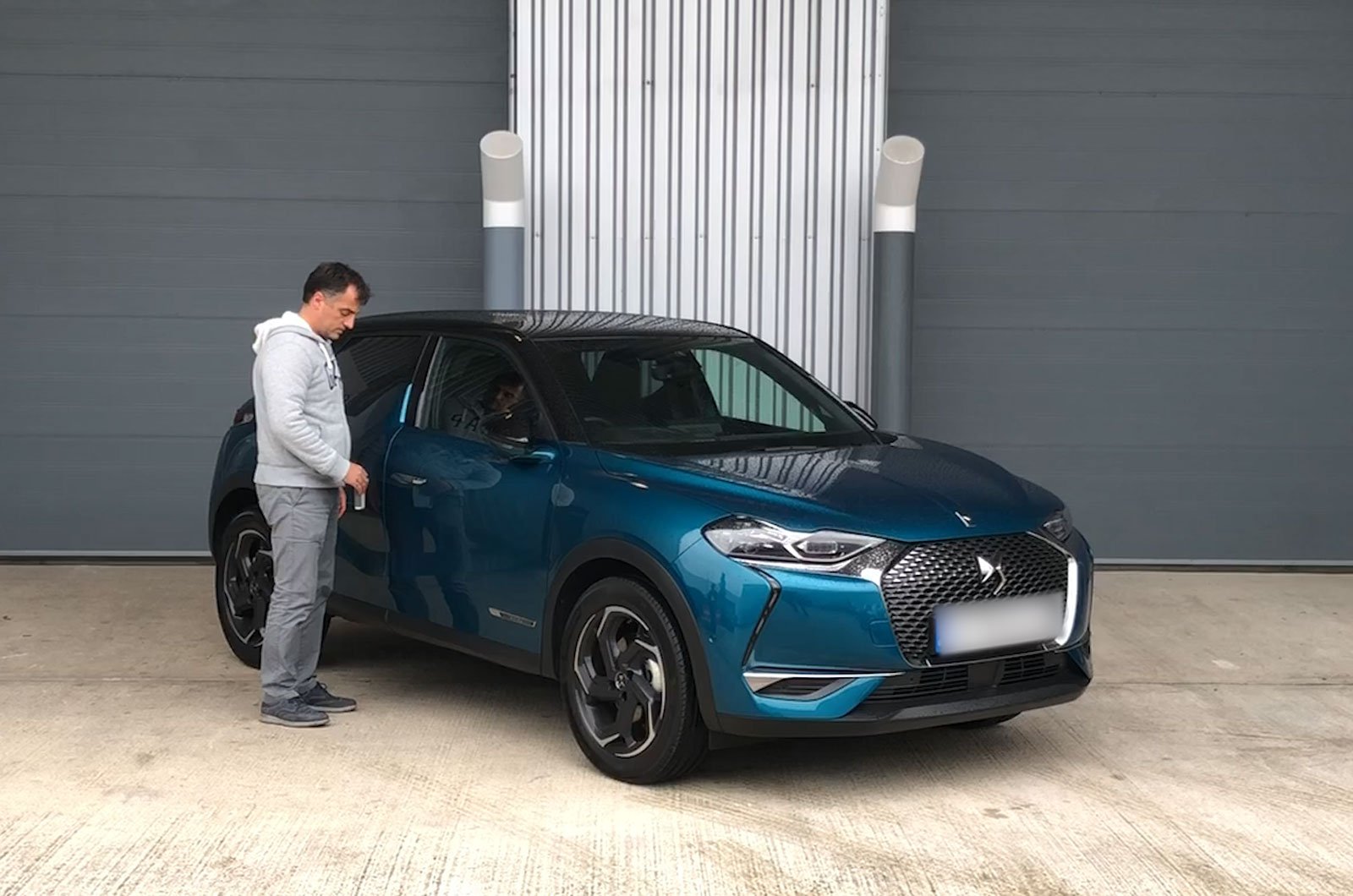 Get into car: 5sec

All DS 3 Crossback models come with keyless entry as standard. The car’s flush-fitting door handles popped out to give our thieves access after just five seconds. It was also easy for them to repeat the code to start the engine using the push-button starter.

The PSA Group, the parent company of DS, responded by saying: “PSA Group has created a dedicated division to analyse and treat potential or proven weaknesses of vehicle security, including to monitor statistics and internet activity. PSA Group works closely with the police and regulatory authorities in order to analyse theft methods.” It also said the keyless entry systems on the latest cars could be deactivated by dealers if owners were concerned. 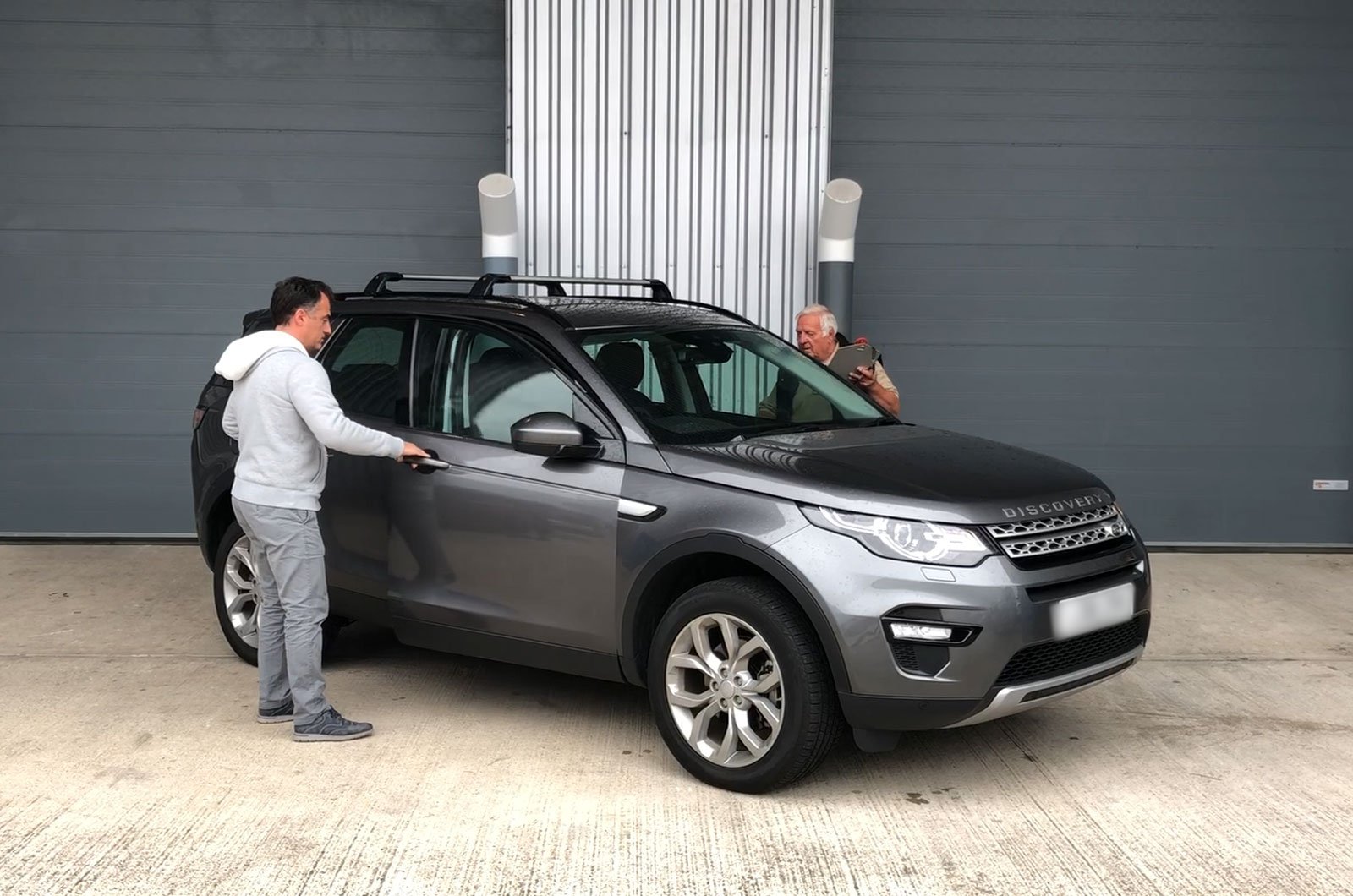 They were then able to plug a device into the car’s onboard computer to get the necessary code to fire up the engine via its push-button starter. Land Rover declined to comment on our tests of the Discovery and Discovery Sport. 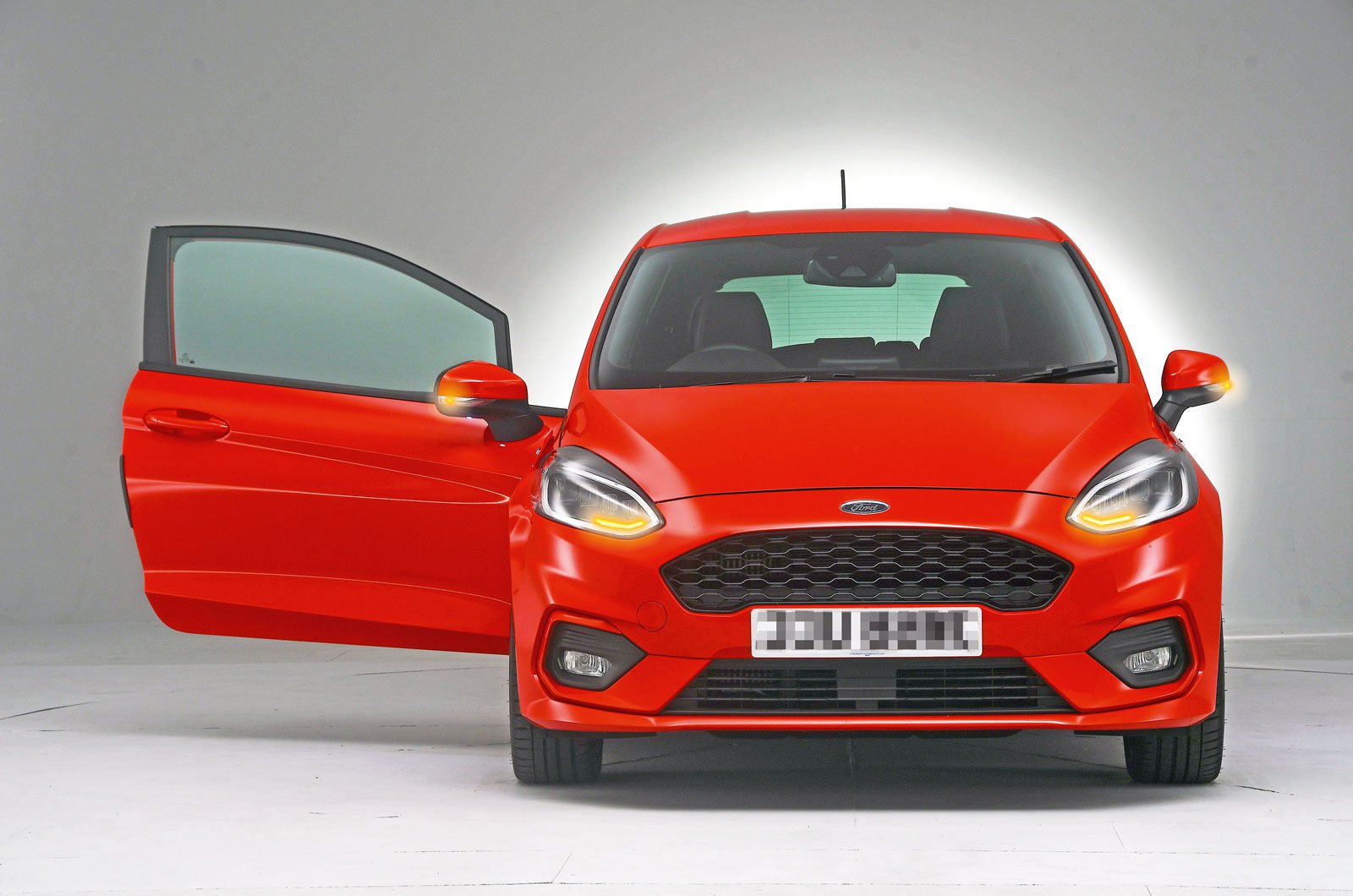 The company says these key fobs will be rolled out across the entire car and van range in due course. Owners of current Fiesta and Focus models can buy a new key fob for £62 and £72 respectively, plus 0.9 hours’ labour to program and test the key. Alternatively, owners of the latest Ford models can disable the keyless entry function via the car’s steering wheel-mounted controls.

Our thieves had to use a lock picker to open the Discovery’s driver’s door, setting the car’s alarm off. And they weren’t able to start the engine, because the car was fitted with ultra-wide-band radio technology, which transmits over a wide range of frequencies at once to stop thieves from being able to pick up the signal. 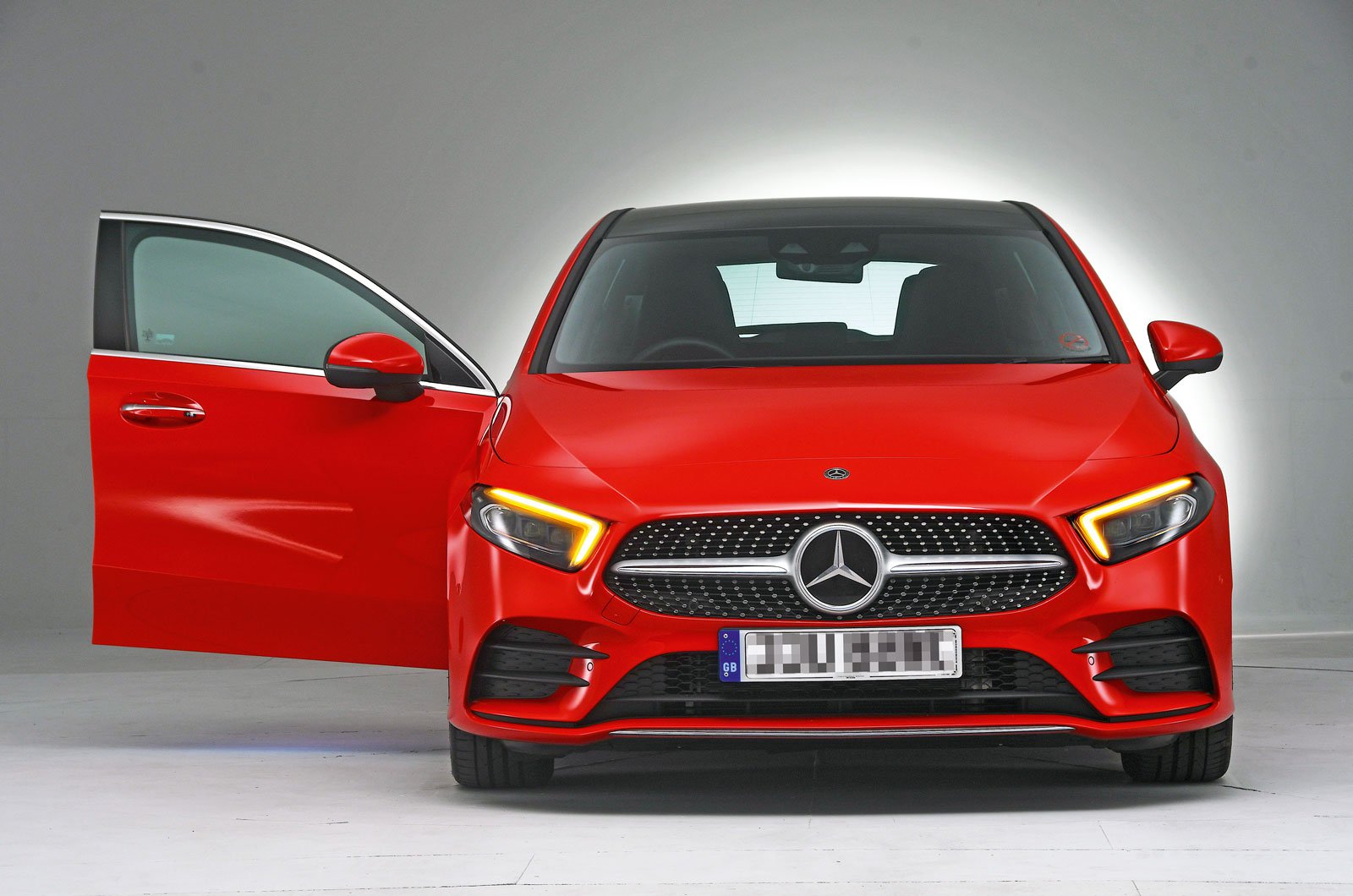 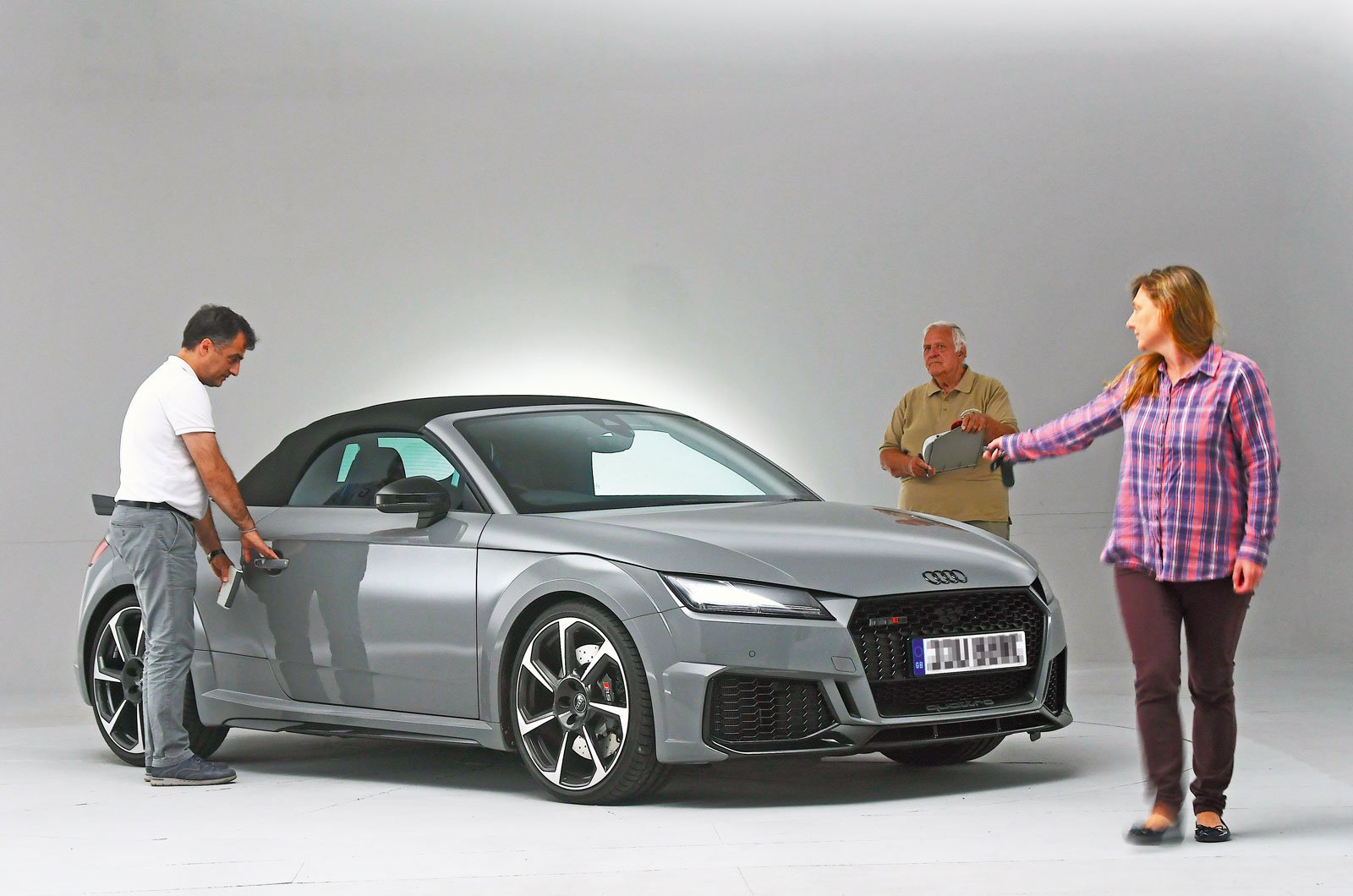 Get into car: 5sec

The TT RS Roadster doesn’t come with keyless entry as standard; without it, it’s harder to get into than when it’s specced with the £1495 Comfort and Sound Pack, which includes the Advanced Key keyless entry system. The optional fob has a motion sensor, but it can’t be put to sleep immediately and doesn’t cut in until the fob has been motionless for 15 minutes. We believe this would prevent thieves from taking the car from a driveway at night.

However, with the key fob awake, our fake thieves could drive away in the TT in just 10 seconds. In response, Audi’s parent company, the VW Group, said: “We are continually working on improving our security measures in order to hinder or prevent such manipulation. We closely observe how thieves work and discuss this topic with police authorities and insurers.”

BMW declined to provide us with a car for our test, so we sourced one elsewhere. Our X3 has a digital smart key with motion sensor technology – part of a Technology Pack that’s standard with Sport trim. BMW told us that the Comfort Access system on the smart key has a “security system that automatically cuts off the signal emitted from the key when it has been stationary for a set amount of time”.

However, we were only given the standard key, because the owner had been having trouble recharging the smart key and wasn’t using it. With this key, we were able to steal the X3 in 60 seconds. We expect the smart key fob would prevent the car from being stolen once the motion sensor technology had cut in. A spokesman also said all new BMW and Mini keyless entry keys now have motion sensor technology as standard.

“Every single case we are aware of where a relay attack method has been used is when the key is left unattended and not in a pocket – hence our approach to the solution.” He added that owners of many older BMW models can pay to have the motion sensor technology retrofitted; the price of this differs between models.

How to keep your car safe 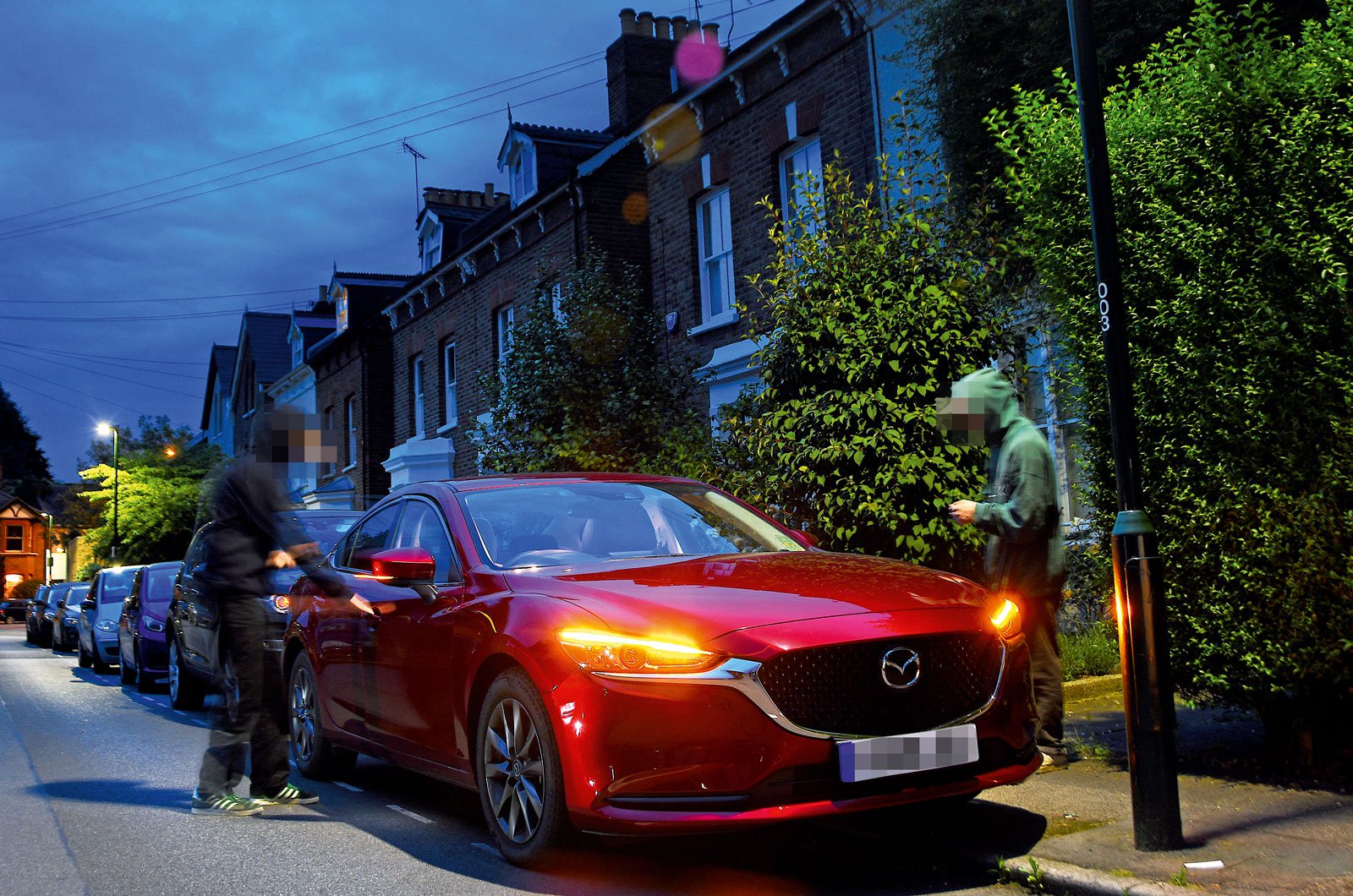 Consider having keyless entry disabled; you can do this yourself on some cars from Citroën and Renault, while others require you to take the car to a dealership and might charge for this.

Invest in a Faraday bag or other car signal blocking pouch and keep the key in it all the time you’re not using the car. Make sure it’s big enough to close securely with the key in it. 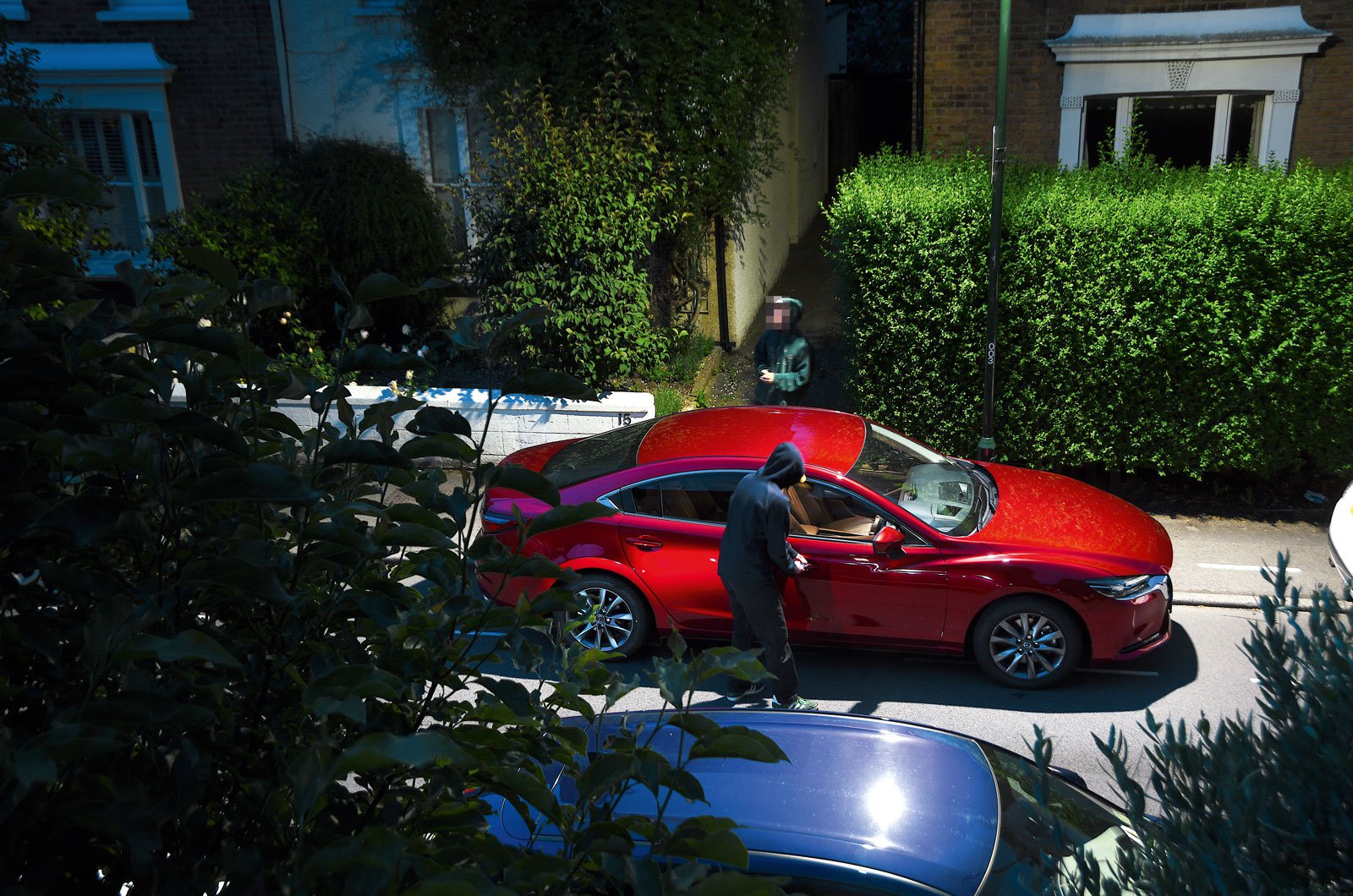 If possible, keep the keys at least five metres away from front doors and windows, but better still, put them in a safe overnight to prevent burglars from stealing them too.

Invest in a steering wheel lock. It may sound like an old-fashioned solution, but this will deter thieves from trying to take your car, because they’ll need to expend time and effort removing it. According to the police, cars with steering locks fitted are the least likely to be stolen. 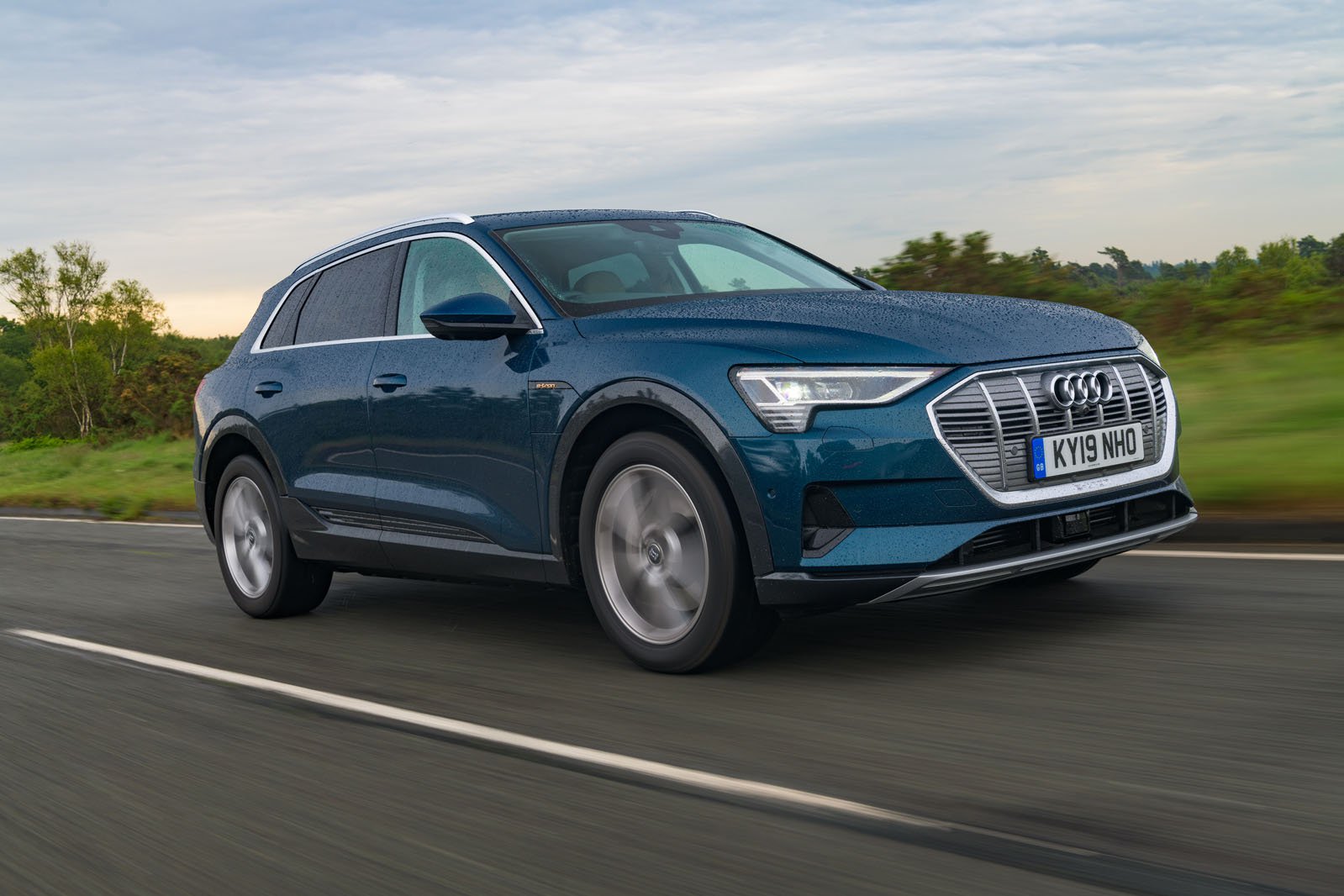 Some of the latest advances in car security have been highlighted by Thatcham Research, the safety and security organisation that administers the car insurance group rating system. It launched a new security rating system in March to give motorists a better understanding of how vulnerable specific new cars are to keyless entry/start theft.

The ratings are ‘superior’, ‘good’, ‘poor’ and ‘unacceptable’, and they’re awarded based on how well a car performs in a range of security tests. These include one that identifies digital vulnerabilities in keyless entry systems, plus an onboard diagnostic port test to see if it can be hacked and a blank key coded up. 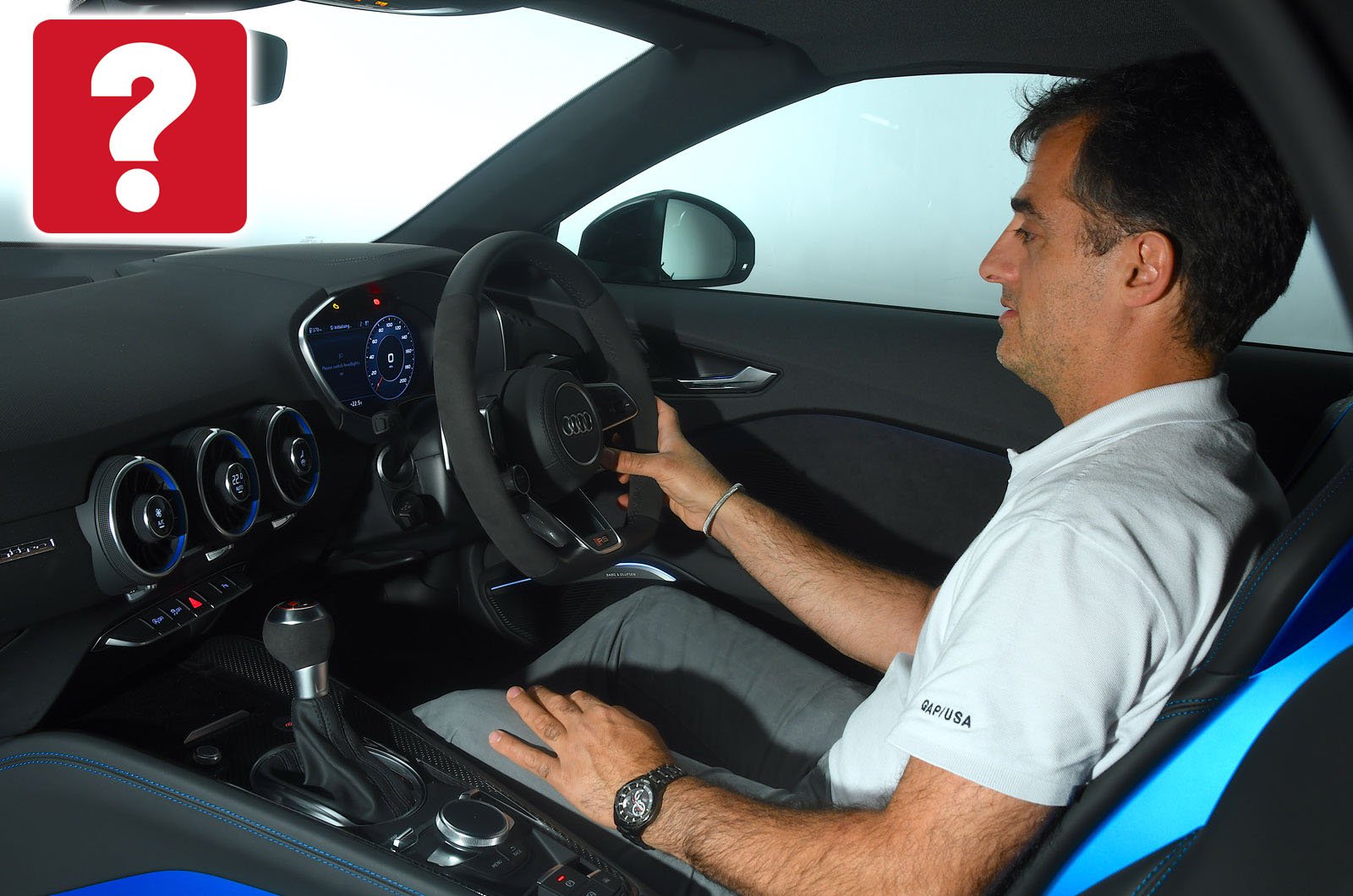 It’s outrageous that some car makers have introduced keyless entry and keyless start systems without making them anywhere near as secure as the traditional alternatives they’ve replaced.

Criminals are able to circumvent the other security systems on these cars, such as alarms and immobilisers, by hacking into their codes. It is great news that a small number of brands, including Audi, BMW, Ford, Jaguar Land Rover and Mercedes-Benz, have introduced new technology to combat theft. We particularly applaud Jaguar and Land Rover for developing a system that prevents cars from being driven away, although we think this should be rolled out across all of its models.

The motion sensor technology introduced by other car makers is also a great step towards improving security. While it protects cars from the most common type of theft – being taken from driveways in the middle of the night – it’s not a foolproof solution that owners can rely on to keep their cars safe at all times.

We’d advise them to invest in a car signal blocking ‘Faraday’ pouch or have the keyless entry system deactivated. Some car makers have come up with alternative solutions to the problem of car theft. For example, Tesla has added a PIN number to the infotainment system to all new and many second-hand models; the cars can’t be driven until the correct code has been entered.

Vauxhall told us that keyless entry technology is not available on almost all of its new cars. Kia, meanwhile, said its research and design department is working on new technology for key fobs or improvements to the security of key fob codes. In the meantime, it’s providing a Faraday bag free with every new car purchased and enabling dealerships to sell the pouches to existing owners at a discounted price of £10.

However, more needs to be done to improve security on many new and used cars with keyless entry and start systems.