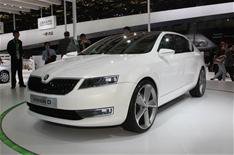 Skoda has revealed plans for a range of new models that it hopes will double sales by 2020.

First to arrive will be a super-frugal city car that is Skoda's version of the VW Up.

A Seat derivative is also due. VW is expected to pitch the Up as a premium city car and will price it close to the Polo, but Skoda says that its version will be significantly cheaper than the Fabia supermini to act as an entry point to the range.

At around 3.4 metres long, the new model will be roughly the same size as a Toyota Aygo. The car is expected to be launched with a petrol engine, but an electric version and even a diesel hybrid could also join the range.

Next up will be a hatchback that sits between the Fabia and Octavia family car in the range.

It's expected to borrow elements from the Vision D concept car that was shown at the Geneva motor show this year and Skoda hopes that its stylish looks will help to attract younger buyers to the brand.

The styling of the next Octavia is also likely to be influenced by the Vision D. It's expected to grow in size to create more of a gap between it and the new model. The Octavia will be pitched at more traditional Skoda buyers, too, with a focus on practicality and value for money.