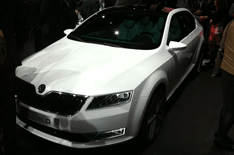 After record-breaking growth last year, Skoda is setting its sights firmly on the future with a new concept car shown for the first time here in Geneva.

Called the Vision D, it shows an insight into the design direction Skoda intends to take, rather than preview any model in particular.

The styling borrows plenty from the existing Skoda line-up, but is crisper and more angular. The long wheelbase a short overhangs also give the Vision D a surprising amount of interior space for a car of its size.

In an effort to make the brand more appealing to younger buyers, the concept has been introduced along with Skoda's new 'crisper' logo, which will adorn all of its cars from 2012.

Skoda has also announced its new strategy for growth, and says it aims to at least double sales by 2018, which will significantly contribute to parent company Volkswagen's long-term goals.