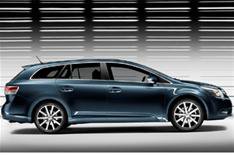 What Car? is offering six readers the chance to take part in an exclusive private preview of the new Toyota Avensis estate car, which goes on sale in the UK in January.

The preview will take place on Tuesday September 23 at Toyota's factory near Derby, and will be preceded by a private tour of the plant, where participants will be able to see current vehicles in production.

Those taking part will be the first members of the public in the world to see the car in the metal, which will be officially unveiled at the Paris motor show in October.

You'll need to arrive at the factory at 2pm for the tour; the Avensis preview will begin at around 4pm and will continue until around 6pm. The What Car? team will also ask you to give your opinions on the car for publication on whatcar.com and in What Car? magazine.

If you would like to take part, email us by clicking here by midnight, Thursday September 18, including the following info: where youll be travelling from on the day, your mobile number, what car you currently drive, and a few lines on why youre interested in seeing the new Avensis estate.

We will consider applicants who can make the preview but not the tour just let us know if you can do both or not when send your email.

We'll get in touch on Friday, 19 September if your application has been successful, with further details of the event.