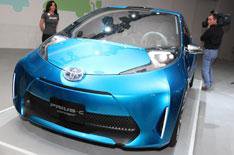 Toyota, which has plans to add 11 new models to its Prius range in less than two years including seven which are entirely new unveiled the first two of them at the Detroit motor show.

A taller model with more passenger headroom and luggage space was rolled out alongside a more compact and sportier-looking concept car that could be a rival to Hondas hybrid CR-Z. The plug-in version of the current Prius that has already been shown in Europe was also present.

Toyota says the new Prius models are a direct response to customer demand. The larger car will be called Prius V and is set to go on sale in the US this summer. It is built on the current Prius platform and hybrid powertrain, but is slightly longer and has up to 60% more boot capacity.

It is the equivalent of a Volkswagen Golf Plus alongside a standard Golf a bit taller, with a flatter roofline giving greater rear headroom. A reversing camera and Toyotas new multimedia system will be available.

The other all-new car is badged Prius C and is aid to be the inspiration for a car that will go on sale in the first half of 2012. Toyota says it is a car with urban appeal and is aimed at young singles and couples who want a green car that is also stylish, just like the CR-Z. However, it will be a full hybrid rather than a mild hybrid like the Honda.

Earlier, Toyota president Akio Toyoda had put in a personal appearance to pledge the companys commitment to the American customer on both safety and environmental grounds. This time last year Toyota was embroiled in the expensive and embarrassing unintended acceleration controversy involving, among other cars, the Prius.

Toyota has just announced plans to build a $50m safety research centre in Detroits home state of Michigan, aimed at finding ways to reduce driver distraction and make cars safer for pedestrians as well as occupants.

Toyoda promised even greater dedication to quality, safety and customer care in future, and confirmed that the company would have battery electric vehicles in 2012, and hydrogen fuel cell cars by 2015 or sooner.