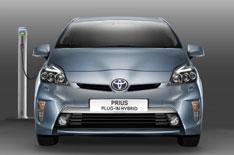 The production version of the Toyota Prius Plug-in makes its public debut at the Frankfurt motor show, ahead of going on sale in mid-2012.

The car differs from the standard Prius because it uses lithium-ion batteries to power the electric motor, instead of the nickel metal hydride battery pack in the current version. These batteries can be recharged by plugging into mains electricity.

This means it has a longer electric power-only range and, according to Toyota's provisional figures, emits just 49g/km of carbon dioxide while averaging 135mpg. That's a significant improvement on the pre-production version we drove last year.

The Prius Plug-in also has an EV-City mode that limits the power of the electric motor to give the farthest possible range in electric-only mode. Recharging via a standard domestic socket takes just 90 minutes.

Externally, the Prius has the same cosmetic tweaks as the revised Prius range but it is distinguished by different trim, including metallic trim for the door handles, front grille and battery charger lid. Toyota says that the charger inlet was moved from the left front wing to a panel in the right-hand rear wing, following customer feedback from a trial programme.

The car is expected to go on sale in September 2012. One high-spec trim level is likely to be offered. Therell be a premium over the standard Prius, but prices haven't been confirmed.

Toyota says, however, the Prius Plug-in will be on a par with its key rivals, the Vauxhall Ampera and Nissan Leaf. That means an expected price of around 25,000, including the maximum 5000 Government grant for plug-in vehicles.