Buy any of these upmarket family cars at a couple of years old and you'll save yourself a tidy sum, but which is the best premium hatch? We have the answer..... 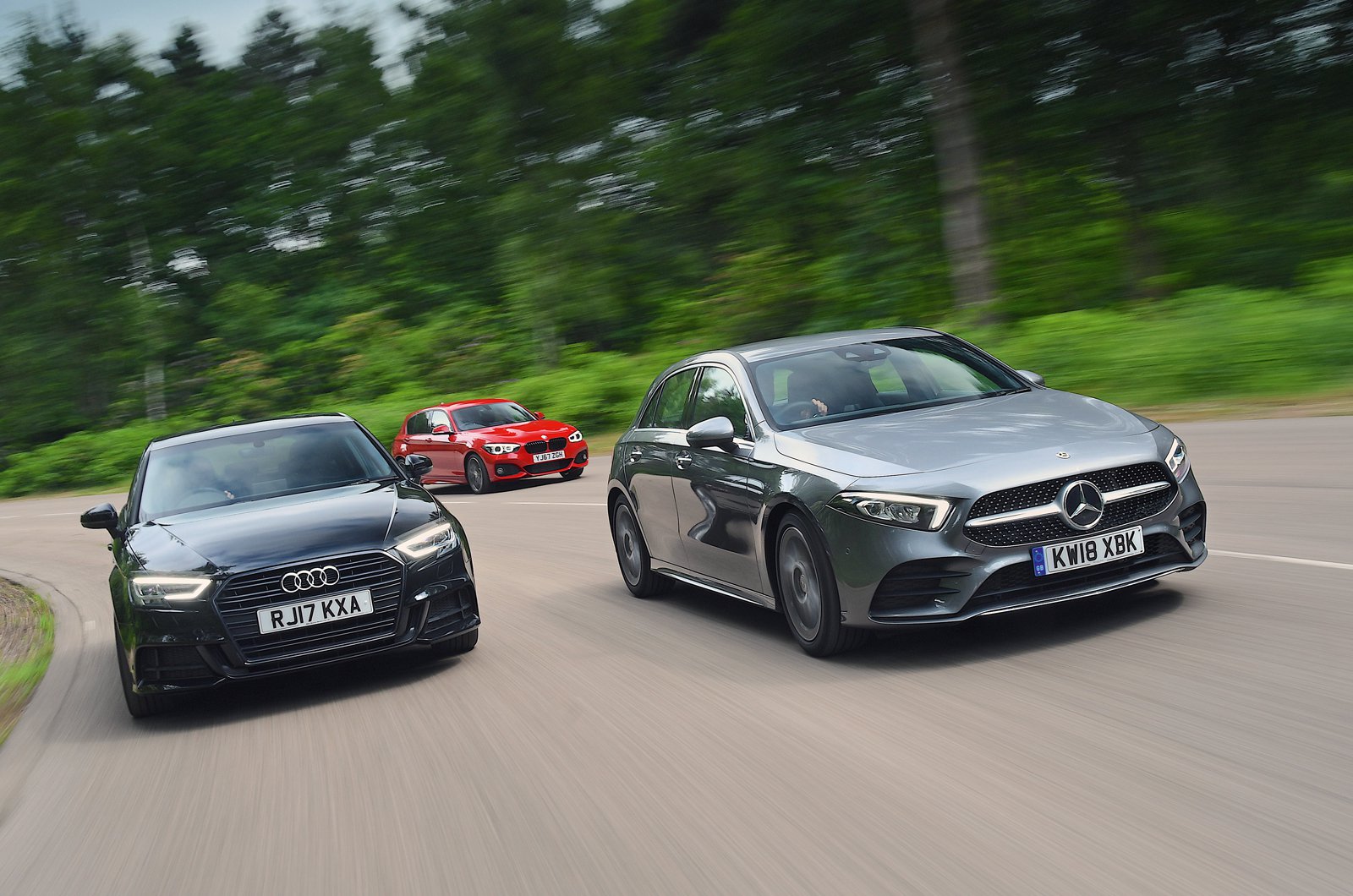 The well-rounded A3 Sportback has consistently ruled the premium family car class, both as a new and used buy.

With the latest 1 Series now driving its front wheels, this older rear-wheel-drive version is a bit of a novelty in this class.

The swanky A-Class is a comfortable and high-tech alternative to its rivals.

Take a look at the new 2020 Audi A3 Sportback and it’s clear that its design has generally played it safe, choosing steady evolution, rather than revolution. There is talk of Lamborghini Countach-inspired flanks, but you’d have to be an anorak of a high order to spot that.

Audi’s similarly cautious approach to the rest of the car is a good omen, though; after all, the previous Audi A3 was one of the outstanding family cars of the past decade – insurmountably impressive in every area, winning awards and plaudits even at the end of its life. It even won our overall What Car? Used Car of the Year Award 2020, so although it had been around since 2012 it clearly hadn’t suffered as a result of its age.

However, if you’re looking to buy a used one with a healthy discount on a new one at, say, two years old, don’t think that it has things all its own way in this class. Buyers looking for a premium family hatchback can choose between it and these two equally competent German rivals: the likewise recently superseded BMW 1 Series, in enthusiast-friendly rear-wheel-drive form, and the suave-looking Mercedes A-Class, this latest version of which is packed with some temptingly high-tech goodies. 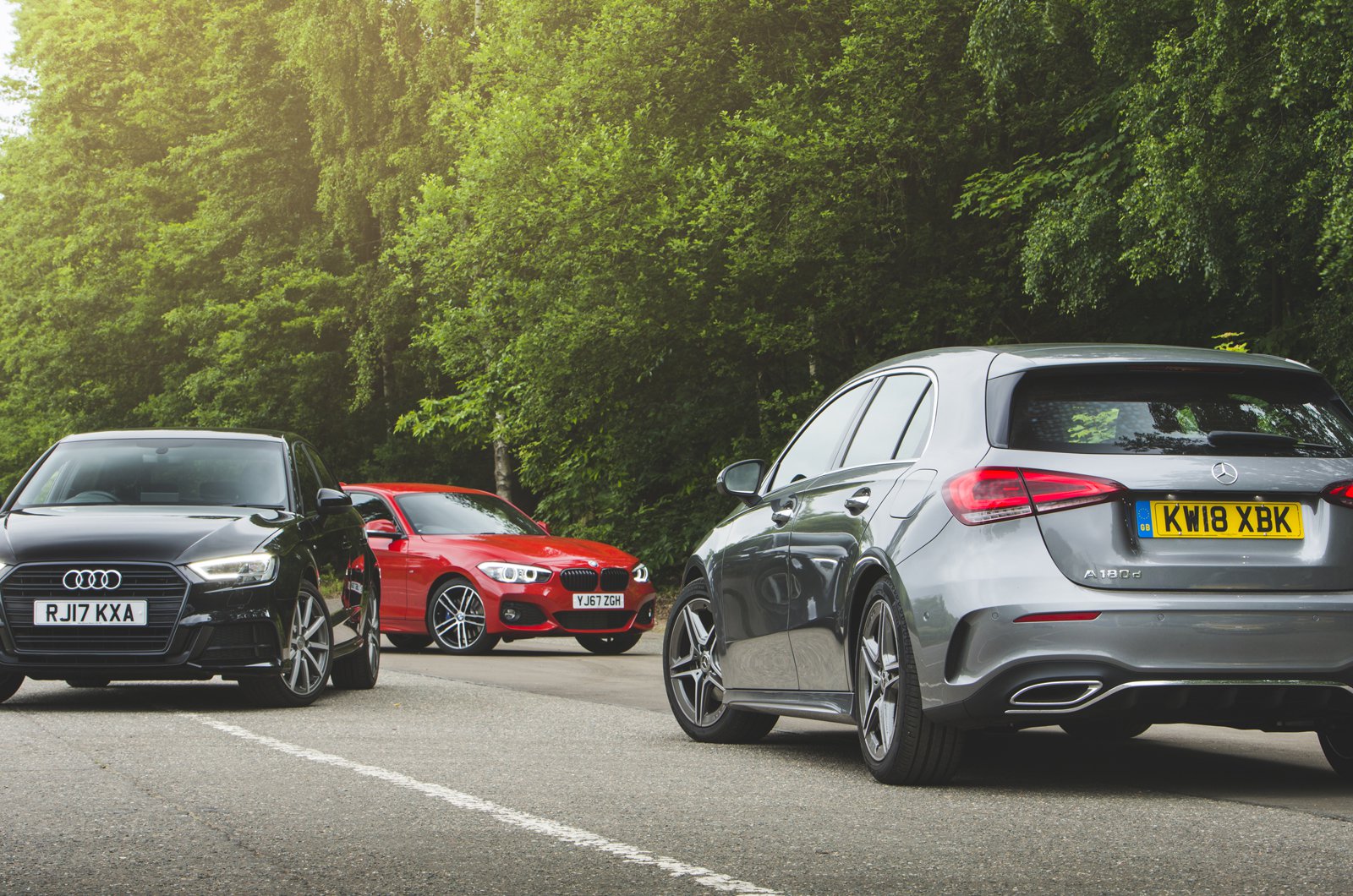 Each car is represented here in a posh trim level but with a relatively small and efficient diesel engine. The A-Class comes with a seven-speed dual-clutch automatic gearbox here, while the A3 and 1 Series are fitted with a six-speed manual ’box (although an auto option was available from new, and many were specified with it).

So, which makes more sense? Read on to find out.

With the words ‘small and efficient diesel engine’ still fresh in the mind, it’s fair to say none of our trio compels you to don a g-suit before setting off. But thanks to a good old slug of turbo shove from low revs, they’re all gutsy enough for both urban use and on motorway schleps.

There isn’t a great deal in it for outright performance, all three covering the 0-60mph sprint in a shade over 10 seconds. However, the 1 Series feels by far the slowest, because its 1.5-litre engine is the least willing to rev. With its best work done by 4000rpm, winding the motor up to its 5600rpm redline feels like torture. 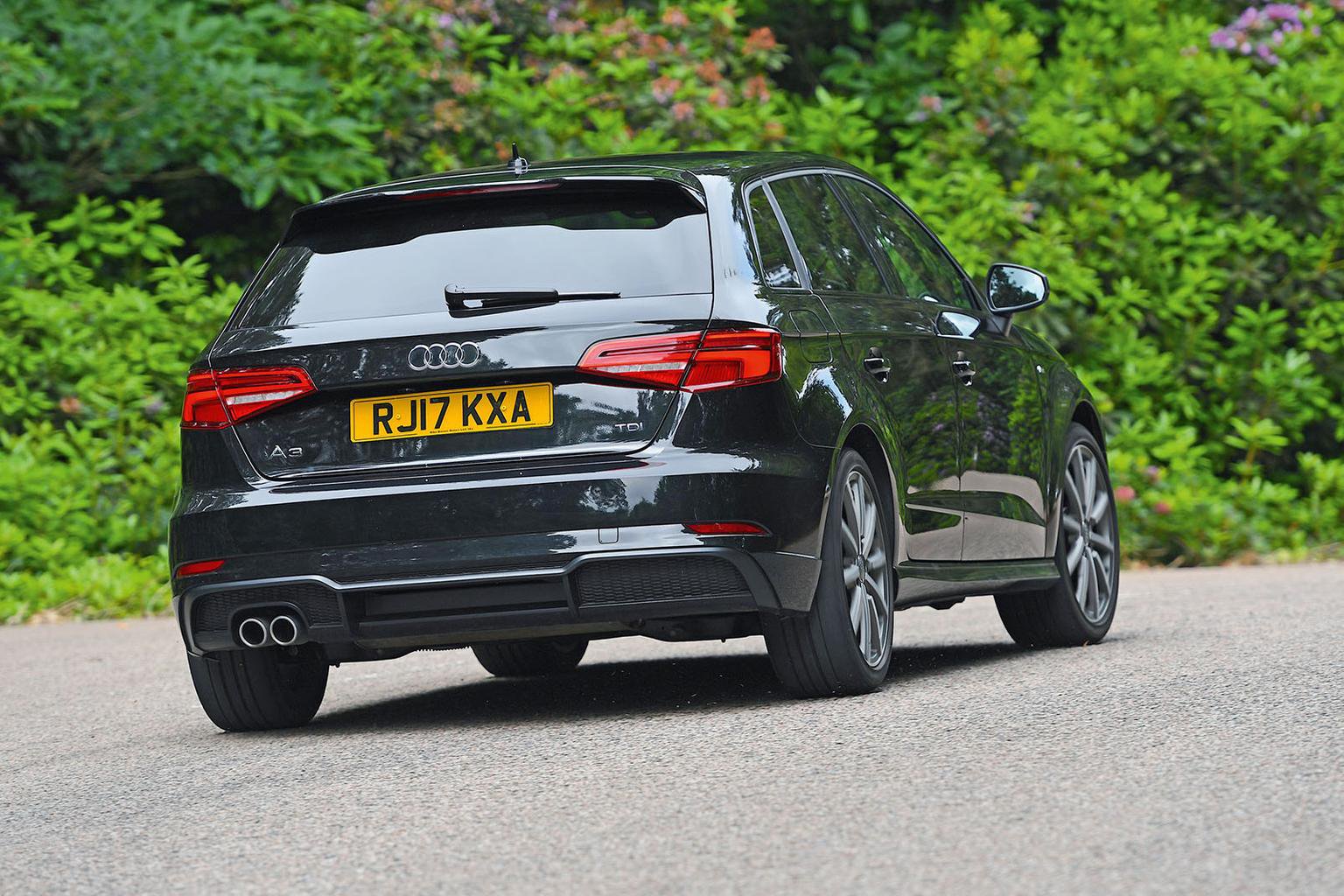 By contrast, the A-Class’s 1.5-litre engine is way peppier. Perhaps that’s partly down to its extra (seventh) gear, but from a 30mph rolling start up to the motorway limit, it pips even the A3. We say ‘even the A3’ because in all other respects, the A3’s 1.6-litre engine is marginally gutsier.

The A-Class’s automatic ’box chooses its gears wisely and promptly most of the time, but not always. Occasionally it fumbles before kicking down a gear or refuses to change up, even when you’re just tickling the accelerator to hold a steady speed. At least the changes are mostly smooth.

The A3’s manual gearbox is slick and its light clutch pedal, with an easily determinable biting point, makes it a doddle to drive smoothly. Meanwhile, the 1 Series’ springy gearlever and woolly clutch action make it neither pleasurable nor particularly easy to drive in stop-start traffic.

Nor is it pleasurable to listen to the 1 Series’ rowdy three-cylinder engine rumbling away at idle. It buzzes in the background like an irate wasp trapped in a bin and transmits the most vibrations through its controls. 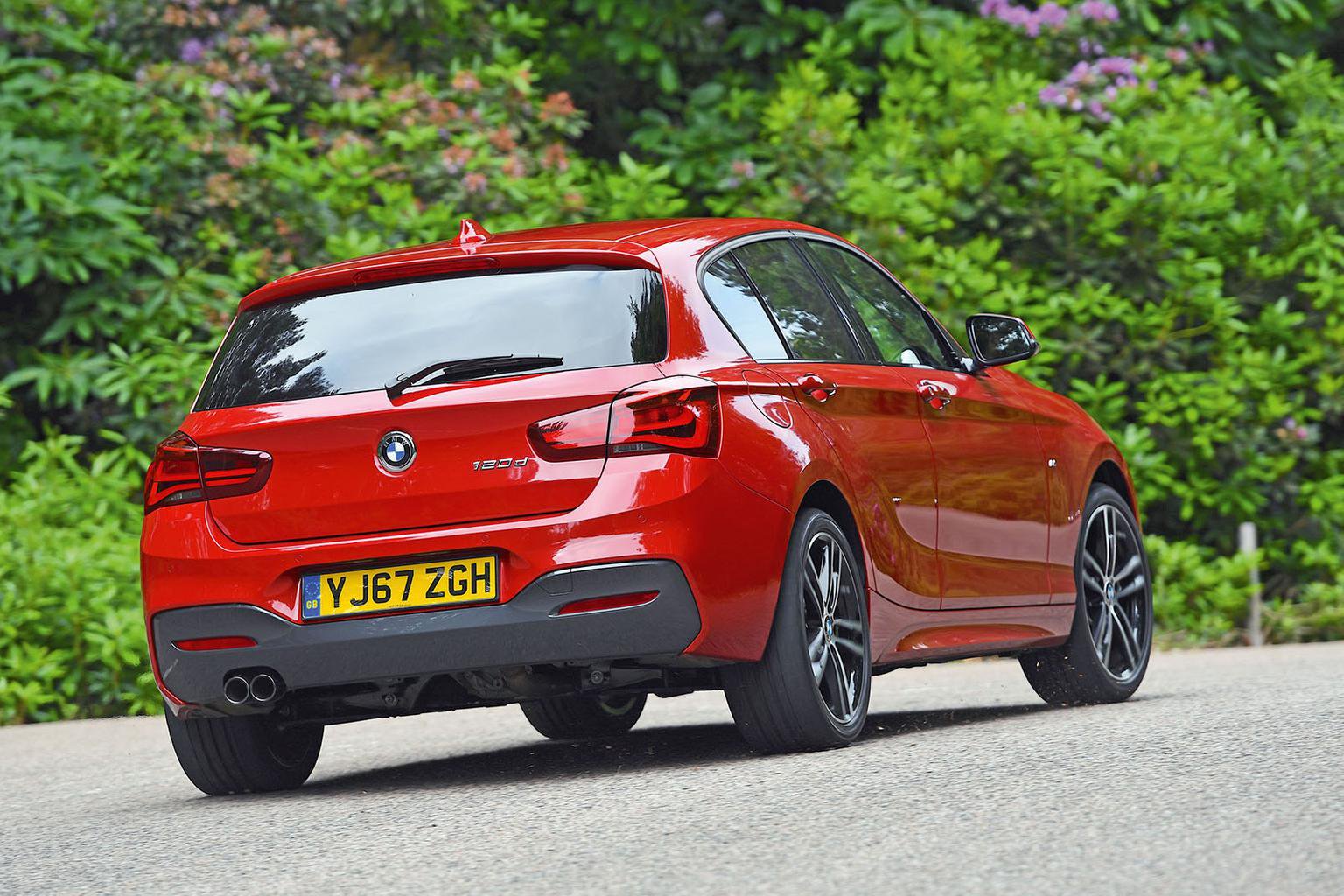 That said, its rivals’ four-cylinder motors aren’t especially quiet, either; both grumble at idle too. But from low to mid revs, the A-Class’s engine takes on only the lightest tinkle, even if does become a bit coarse when you work it hard. The A3’s motor is marginally smoother as a rule, but it develops a deeper bellow when you accelerate hard.

If you spend a lot of time on motorways, the A3 and A-Class offer the most peace and quiet. There’s fractionally less road noise in the A3, but the A-Class is better for wind noise, thanks to its superb aerodynamics. The 1 Series is the loudest at higher speeds, due to a combination of whistling wind and roar from its tyres.

None of our trio rides as comfortably as the Volkswagen Golf, but which of them is next best? Well, it’s a toss-up between the A-Class and A3. Both are very good, but the A-Class’s softer springs have more give over hefty urban bumps than the slightly firmer A3. Meanwhile, the A3 is marginally more settled on rippled sections of motorway, so it’s horses for courses. That’s assuming you’ve bought a car fitted with the softer Dynamic suspension (a no-cost option from new) in place of the A3’s firmer standard Sport set-up, though. 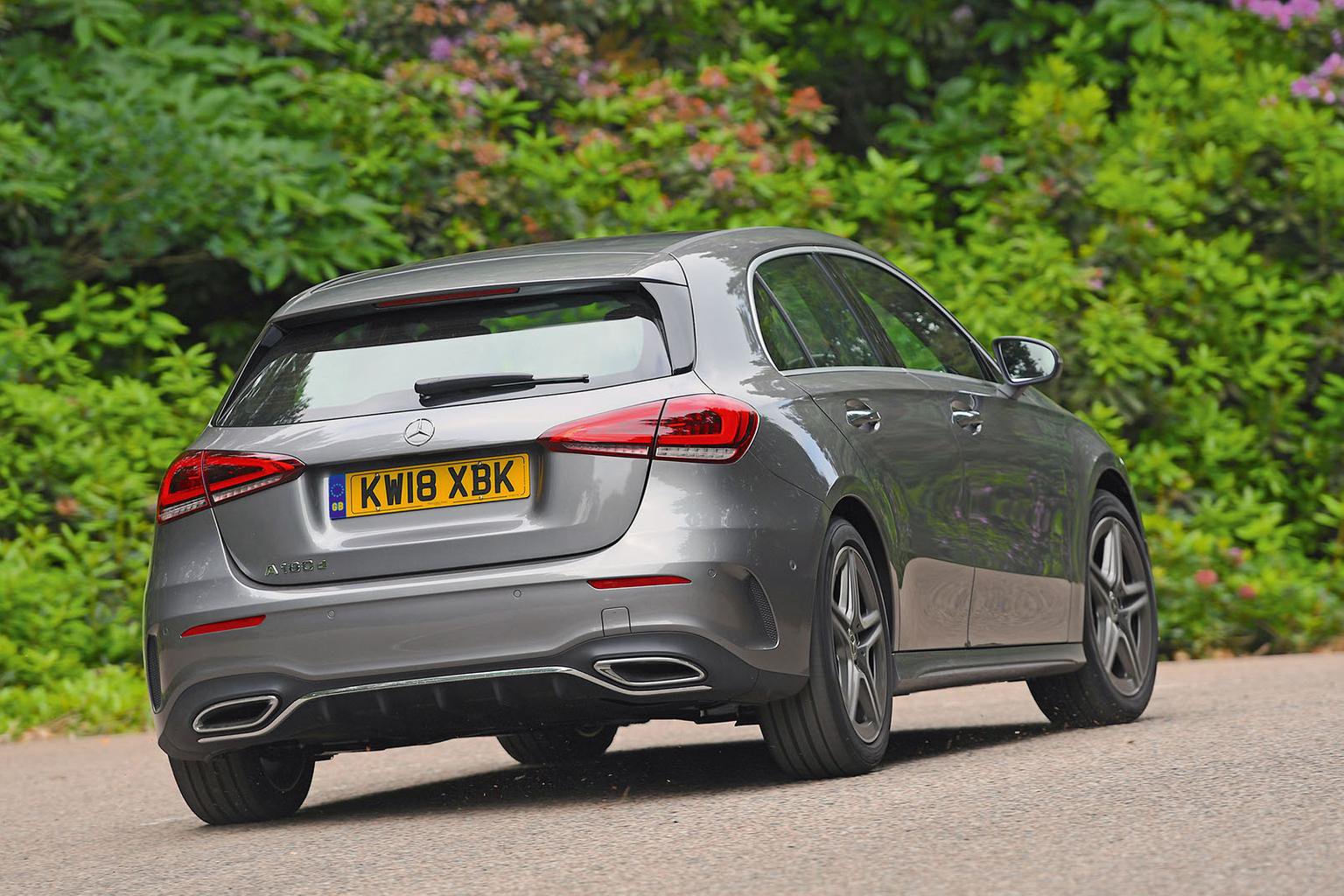 The 1 Series is the least cosseting. Its standard M Sport suspension is the lumpiest around town, the bounciest over larger crests and the most jittery on poorly surfaced motorways. As with the A3, you could have opted for softer suspension for no extra charge, but this doesn’t noticeably improve matters.

“Ah, but it’s rear-wheel drive, so a bit of the jitters is worth it for sportier handling, right?” Sadly not; the 1 Series simply isn’t as crisp to drive as its rivals. Take its steering: it does the basics of turning the car left and right, but it’s so inconsistently weighted that you find yourself taking two or three stabs at the wheel through a bend that, in the sweeter-steering A3, you can swoop through with one fluid motion. The A-Class’s steering isn’t far off that level, but if we’re being picky, it isn’t quite as linear and predictable.

And while they all lean a bit in corners, the 1 Series needs the most time to settle down again, creating a sense of unease if you attempt to hustle it through a series of left-right switchbacks. That’s precisely where the A-Class is at its finest, with progressive body control breeding stability that imparts confidence. In the end, though, it runs out of front grip sooner than the A3, which is the most balanced and enjoyable, but the margins are small.