Vauxhall Insignia: a car in disguise 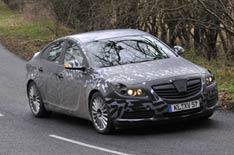 Vauxhall has released more images of its new Insignia, which will make its debut at the British Motor Show in July.

The new images don't give much away, though - Vauxhall has done its best to ensure its exact design remains a secret until its launch. All 200 of the prototype Insignias currently being road-tested around the world will be disguised in a similar way.

Tricks include using rounded, fish-shaped diamond stickers to hide the car's lines, and applying special reflective materials to cause a flickering effect and trick cameras. Fixing a logo from a rival manufacturer is also a popular trick used to confuse prying eyes.

Vauxhall says the biggest risk of secrets getting out is when a driver stops for a break. As a result, it imposes strict rules, stating that the test car may not stop at public places unnecessarily and a tarpaulin must always be on board to cover the car.

The company also insists that a second car must accompany the prototype to ensure help is at hand if needed.