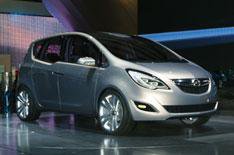 This is officially a 1.4-litre petrol-engined concept car, but company officials have confirmed it will go into production with a far wider engine line-up but only minor design modifications.

The main feature of the car is its rear-hinged back doors, which have been dubbed Flexdoors. They are fitted on both sides of the car and open to 90 degrees to aid access.

However, for safety reasons and to comply with EU regulations, the rear doors will open only when the car is stationary.

Although the car will retain a central side pillar for strength, the layout is said greatly to improve access to the rear cabin. This is expected to appeal to elderly buyers and those with children.

Inside, the concept car reveals the shape of the new Merivas dashboard and trims, although the quality of the materials on the production car is likely to fall to keep production costs down.

This layout follows the precedent set by the Flextreme concept car, which was first shown at the Frankfurt motor show last year and is on display here in Geneva again, from which the Meriva concept takes strong styling cues.