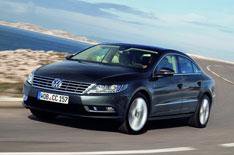 The VW CC is a lightly face-lifted update of Volkswagen's handsome Passat CC.

As well as dropping the 'Passat' name, the key changes are revised front and rear-end styling the bumpers and grille are new while the most useful improvement is the upgrade to five seats over the Passat CC's four.

What's it like to drive?
Additional sound-proofing and impressively refined engines make the CC as sophisticated to ride in as it is to look at. The entry-level 1.8 petrol is an enthusiastic engine that's not short of torque, while the 138bhp diesel that will continue to be the best-seller is smooth and quiet.

For the most part, the ride is good, despite sharp bumps occasionally troubling it. The VW CC proves agile, stable and easy to handle through bends, if not quite as sporty as its styling suggests.

The steering is partly to blame for that the 1.8's felt disconcertingly vague at times, although the 2.0 diesel's was smoother-moving and more precise.

What's it like inside?
The CC looks invitingly stylish from the outside and few will be disappointed when they sit in it.

There's generous space up front, although that's partly because the seats are smaller and a little less enveloping than they might be, and plenty of legroom in the rear.

Tall back-benchers could tangle with the ceiling of this more rakish saloon, but headroom isn't that bad. An unusually long boot, with a big well beneath, is supplemented by easy-fold split rear seatbacks.

Should I buy one?
This is a handsome, stylishly sumptuous car that comes with some particularly good engines, generous equipment and for most users, more than enough room. It's also refined, making it an excellent long-distance machine.

It's not cheap compared with more conventional saloons in this class, but it's likely to hold its value better, potentially making it cheaper to own overall. The stop-start-equipped Bluemotion diesel averages 60.1mpg, and emits 125g/km of CO2. Keener drivers may prefer the crisper dynamics of Ford's Mondeo or the excellent new BMW 3 Series, but otherwise, this freshened CC makes a tempting buy.