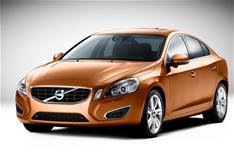 Volvo has released its first pictures of the all-new S60.

The pictures come ahead of the BMW 3 Series and Mercedes C-Class rival's official unveiling at the Geneva motor show in March. Production will start in early 2010 at Volvo's factory in Gent, Belgium.

Sportiest Volvo ever
The S60 remains close to the concept car first shown at the Detroit motor show, and Volvo says the new S60 is 'sportier and more dynamic' than any of its previous cars.

Stephen Odell, president and CEO of Volvo cars said: 'The all-new Volvo S60 looks and drives like no other Volvo before and the car's technology will help you to be safer and more confident behind the wheel.

Safety still important
In keeping with Volvo's aim that no one will be killed or injured in a Volvo by 2020, the S60 can be equipped with Pedestrian Detection a safety feature that can detect pedestrians in front of the car and brake automatically if the driver doesn't react quickly enough.

The new Volvo S60 will be unveiled at the Geneva motor show in the beginning of March next year. Production will start early in summer 2010 and will go on sale in the UK in September.