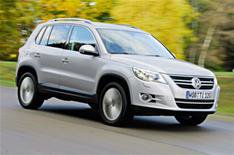 Volkswagen is considering introducing a performance R-Line version of its Tiguan small 4x4 and a more economic two-wheel-drive model.

These would be in addition to the 1.4-litre petrol and 2.0-litre diesel models which go on sale in the UK this month.

They are also supplementary to a 168bhp 2.0-litre diesel and two additional petrol models, which VW has confirmed will be added to the line-up later this year.

The R-Line is expected to feature an engine with over 200bhp from the Golf or Passat range, 20-inch alloy wheels and a bodykit that includes flared wheelarches.

The two-wheel-drive Tiguan is being developed for buyers who don't want to go off-road, and who would benefit from the fuel savings from not having a heavy four-wheel-drive system.