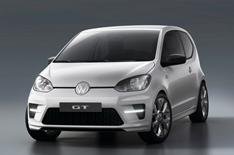 The VW Up GT has been given the go-ahead for production, company sources have told What Car?.

VW previewed the hot hatch version of our Car of the Year 2012 with the GT Up concept car at the Frankfurt motor show 2011. The production version is likely to closely resemble the concept car, with a sporty makeover including deeper bumpers, twin exhaust tailpipes, gloss black door mirrors and LED running lights.

Earlier this month, VWs research and development boss, Ulrich Hackenberg, told What Car? that the Up family will be expanded and that a prototype version of the Up GT was already being tested.

VW has confirmed that the Up GT has a turbocharged 108bhp version of the Up's 1.0-litre, three-cylinder engine, linked to a six-speed manual gearbox. Wed expect lowered and stiffened suspension, while tweaked steering is also a possibility.

VW hasnt confirmed an on-sale date or prices for the Up GT. We expect itll arrive in 2013, however, with a price of around 13,000.