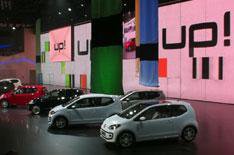 Meet the Up, Volkswagen's forthcoming city car. The Up has generated serious interest since the concept was shown at the Frankfurt motor show in 2007, not least because initial plans included a 4000 price.

Such hype was always going to be difficult to live up to. Disappointingly, 'prohibitive costs' meant that the rear-engined, rear-wheel-drive layout of the concept didn't make it through to the final design. That would have set VW's smallest car well apart from its rivals.

Although the Up looks quite conventional, its simple shape is instantly recognisable as a VW. We think it manages to look cute and practical at the same time.

The Up also manages to cram an impressive amount of space into a tiny footprint. At a Fiat 500-sized 3.5m long, 1.6m wide and 1.5m high, it is one of the smallest four-seater cars available, but short body overhangs and a lengthy 2.4-metre wheelbase allow it to comfortably accommodate four people.

Their shopping shouldn't be a problem either, because the 251-litre boot is one of the biggest in this class. With the rear seat folded down, cargo space reaches a Mini-beating 951 litres.

The range will be launched with three versions: the entry-level Take Up; the Move Up, which is more geared to comfort, and the top-of-the-range High Up.

Prices are expected to start at around 8000 - a sign that Volkswagen considers this a trendy model rather than budget one.

Just two three-cylinder, 1.0-litre petrol engines will be available at first: a 60bhp variant delivering 67.3mpg, and a 75bhp motor that will do 65.7mpg. Both are expected to emit less than 100g/km of CO2. Bluemotion Technology versions featuring stop-start systems and superior efficiency are set to follow next year.

Some markets will get a natural gas fuelled version returning just 79g/km from 2013, but this will not be offered in the UK.

City driving is at the heart of the Up's design, which is why you'll be able to specify your Up with the first automatic emergency braking system seen on a supermini. It works at speeds of less than 18mph, and stops the Up running into an obstacle. It's a nice touch, but you'll have to pay extra for it.

The Mobile Maps + More infotainment device will be standard on the range-topping High Up and will be optional on lesser versions. The touch-screen unit has been designed to be in keeping with the Up's interior and snaps snugly into place above the centre console.

The standard interior on all models is basic, but clean and well organised. In terms of styling, the dash, seats and side panels can be colour-matched to the car's exterior paintwork.

Perhaps most interesting is what the Up paves the way for. A condition for building the car was that its platform could be shared with other companies in the VW Group. Audi, Seat and Skoda are all keen to add micro-cars to their ranges.

Volkswagen has also confirmed that the Up platform will be used for its first electric production car, the Up blue-e-motion thats planned for sale in 2013.