What Car? hikes for Help for Heroes 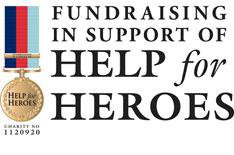 On June 3, a trio of intrepid hikers from What Car?, together with colleagues from Autosport and Autocar will be undertaking the Three Peaks Challenge for the charity Help For Heroes.

They will be part of a team supported by Vauxhall, which has named Help for Heroes as its nominated charity.

They aim to have climbed and descended Mount Snowdon in Wales less than 24 hours later, having completed Scafell Pike in the Lake District along the way.