More for you |
The best deals on our most in-demand carsThe best new car leasing deals on seven-seatersThe secrets of washing your car to perfection2021 BMW iX3 electric SUV revealed: price, specs and release dateShould I ditch my diesel-engined Porsche?
Home
News
Who will make the world's cheapest car?
news

Who will make the world's cheapest car?

* Tata Nano has a rival * Renault-Nissan teams up with Indian company * Ultra Low Cost car could come to Europe... 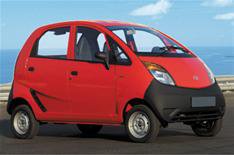 Tata has a fight on its hands to produce the world's cheapest car.

Earlier this year, Tata unveiled the Nano, which will go on sale in India for 1250.

However, Renault-Nissan has linked up with Indian motorcycle manufacturer Bajaj Auto and revealed its ULC car, which stands for Ultra Low Cost.

The car will initially be sold in India when it goes on sale in early 2011, and initial projections suggest it will cost 1270.

However, analysts suggest that Tata and Renault-Nissan may discount their cars as they vie to be known as the makers of the world's cheapest car.

As with the Nano, there is a possibility that a heavily revised version of the car that meets higher crash standards could be sold in Europe.