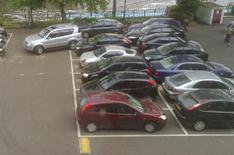 Nottingham council's plans to charge businesses an annual fee for each parking space on their premises could face legal action.

Called the Workplace Parking Levy (WPL), the tax is set to come into effect in 2010. Under the proposals, businesses with 10 or more car parking spaces will be charged 185 per bay per year.

However, employers in the region have threatened legal action, with one of the largest, Boots, facing an annual bill of more than 800,000.

Many businesses are threatening to pass the costs on to its employees - a move that has been criticised because it would penalise low-earners with no access to alternative transport.

Now Derbyshire and Nottingham Chamber of Commerce has threatened legal action in a bid to overturn the proposal.

'I'm sure businesses are going to take this matter extremely seriously and will be wanting to look at every aspect of it to see if it can be overturned,' said George Cowcher of Nottingham's Chamber of Commerce.

He added: 'This is very bad news for the town. Why Nottingham is almost transfixed by imposing this particular levy is beyond belief.'

The council has said that the aim of the WPL is to target commuters, not shoppers or pensioners. It also says the tax will help raise the 5.6m needed in 2010 to improve the transport network in Nottingham.