More for you |
Why is my new car’s fuel economy so poor?True MPG: how close to reality are official fuel economy figures?2019 Volvo XC60 video - watch our in-depth reviewHow much will it cost to take my car to France?Volvo recalls 70,000 UK cars over fire fears
Home
News
XC60: Volvo's 'safest-ever' car revealed
news 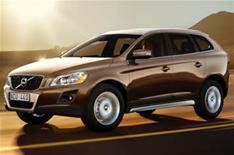 These are the first official pictures of the Volvo XC60, which will be displayed at next month's Geneva motor show before going on sale in the UK this October.

Volvo has the BMW X3 firmly in its sights with the XC60, and is describing the XC60 as having the high ground clearance and large wheels of a 4x4, but the styling of a coupe.

The new car will be launched with three engine options and four-wheel-drive as standard. The engines are a 279bhp 3.0-litre petrol and 160bhp and 181bhp 2.4-litre diesels.

Volvo is also billing the XC60 as the safest car it has ever built.

Features include a 'City Safety' system, which will be standard. It automatically brakes the car if it senses it is about to have a front-end impact and is effective at speeds up to 20mph.

How much will it cost to take my car to France?