Cast your mind back to your elementary Latin lesson, and you’ll no doubt remember that ‘ignis’ is the word for ‘fire’. A bold name for a car, you might think – but rather than a comment on its flammability, the Suzuki Ignis is so-named because its maker would like to think it’ll set your heart alight.

That’s the intention of the deliberately head-turning styling, anyway. From its big, googly eyes to its wide stance and angular, chopped-off tail, the Ignis stands out in any crowd. And that’s good, because it has two crowds in which to mix: it’s priced and sized in contention with city carssuch as the Volkswagen Up and Kia Picanto, and yet its high-riding stance and the option of four-wheel drive mean it has the feel of a diminutive SUV a shade below the Dacia Duster and Citroen C4 Cactus in size.

You get a choice of two petrol engines – well, to be more precise, it’s just the one option, a 1.2-litre petrol, but you can choose to have it either with or without assistance from a very small electric motor, making it a mild hybrid, which Suzuki calls SHVS. The model range starts with the SZ3 version, which has the basics but little else, but moves up through the SZ-T and SZ5 versions, which are more generous. There’s also a rufty-tufty Adventure version, based on the SZ-T, with chunky body styling and side stripes making this Ignis even more extrovert.

The Ignis is quite an appealing thing inside, too. With its two-tone colour scheme and attractive lines, the dashboard is more interesting than many city cars’. True, it’s built out of hard, cheap-feeling plastics, but crucially the bits you touch regularly, such as the indicator stalks and switchgear, feel high-quality. Shame about the aftermarket touchscreen system fitted to SZ-T and SZ5 versions, though; it’s fiddly, complicated and none too easy on the eye.

Happily, there’s a useful amount of space in the Ignis, with seating for four adults perfectly feasible – a rarity in a car this small – and the boot’s a practical size too. Keep in mind that the SHVS has a smaller boot, though, as that’s where Suzuki’s had to find space for the extra electrical gubbins.

So what’s the Ignis like to drive? Well, a mixed bag, to be honest. There are some good bits here – for example, both engine options feel eager and keen to rev, which makes the Ignis feel perky around town. They sound good, too. Meanwhile, good control of body lean and impressive grip make it agile in corners, despite its high-sided stance, and in the four-wheel-drive version, you can tackle muddy fields and slippery hills in confidence. And over larger bumps, the soft suspension cushions you rather well.

The trouble is, smaller bumps and potholes on town roads pose the Ignis a problem, as it jitters and fumbles over them. Other issues include the vague steering, which takes the shine off your fun in corners, and the wind and road noise, which build up at high speed, making long journeys rather tiresome. On the whole, though, while flawed, the Ignis is a characterful little car to drive.

Find a used Suzuki Ignis in the What Car? Classifieds here 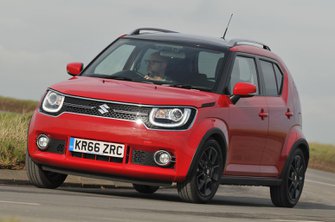