A much-given piece of advice is the old adage “buy cheap, buy twice”. In other words, skimp on a purchase and you’ll regret it in the long run. That may be sage advice when it comes to choosing a new sofa or fridge, but does the Dacia Duster SUV prove that thriftiness can sometimes leave you feeling rather smug?

In the world of wheels, Dacia is the champion when it comes to giving motorists lots of car for their money. The Duster is a family SUV that can cost as little as half the price of a Seat Ateca or Skoda Karoq, and handsomely undercuts the Renault Kadjar. That latter point is particularly significant: Dacia is a sister company to Renault and shares technology with the famous French marque. So, a lot of what underpins the Dacia Duster comes straight from Renault.

The Dacia Duster range has enough variants to suit the broad requirements of most families. The cheapest play the role of a no-nonsense, domestic workhorse, while the top trim levels have plenty of mod cons. And, depending on which of the petrol or diesel engines you opt for, two or four-wheel drive is available.

With so much choice and offering such great value, it’s no surprise that the Dacia Duster has won Best for Value in the family SUV class in our What Car? Car of the Year awards. Naturally, other brands have cottoned on to the Dacia formula, and the MG ZS matches the Duster for size and challenges it on price. Does that make a better buy, or should you stick to the old adage and set your sights on something a little pricier?

Read on to see how it compares with its closest rivals. And, whichever new car takes your fancy, our New Car Buying service is ready to offer you a great discount on the Duster, and many other cars, without any haggling.

Our favourite Duster engine – the 128bhp 1.3-litre turbocharged petrol, badged TCe 130 – offers decent mid-range oomph and a pleasing briskness when you rev it out. 0-62mph takes 10.6sec, which is roughly the same as an MG ZS 1.5 or Skoda Karoq 1.0 TSI 115, and it has no problem getting up to speed and delivering easy motorway cruising.

Moving up to the more expensive 1.3-litre TCe 150 gets you a bit more zip in a straight-line, but it’s only worth the extra expense if you must have the quickest Duster on the road. If you want four-wheel drive you have to opt for the 113bhp 1.5-litre Blue dCi 115 diesel. It’s pokey enough, once you get the engine spinning above 2000rpm, but, oddly for a diesel, it doesn’t add any extra low-end muscle over the petrols. You might find that an issue if you want to tow a caravan.

Try to avoid the entry-level 1.0-litre TCe 100. The power delivery is quite flat and it takes a relative age to get up to motorway speeds. There’s also a TCe 100 Bi-Fuel version that can run on both petrol and natural gas (LPG) and has two fuel tanks to enable this. The main benefit of this is the potential for fuel savings; we’ll explain how in the Running Costs section of this review. In terms of performance, though, you’ll not really notice any great difference switching between the two fuels; running on either the Bi-Fuel feels rather sluggish.

The Duster borrows a lot of its underpinnings from older Renaults, so its suspension isn't cutting edge and is unable to match the polish of the best-riding family SUVs, such as the Skoda Karoq. That said, going for a four-wheel-drive version gets you more sophisticated rear suspension that helps improve stability and comfort, both on and off road.

Both setups are very soft. That's not necessarily a bad thing; it helps smooth out most lumps and crags around town, aided by Duster's rare combination of relatively small wheels and high-profile tyres – lots of rubber in the tyre sidewalls helps absorb shocks even better. However, on faster roads strewn with heaving undulations, the Duster does rock from side to side gently on its soft springs, which could get on your nerves. Not as much as the really bouncy MG ZS, though. 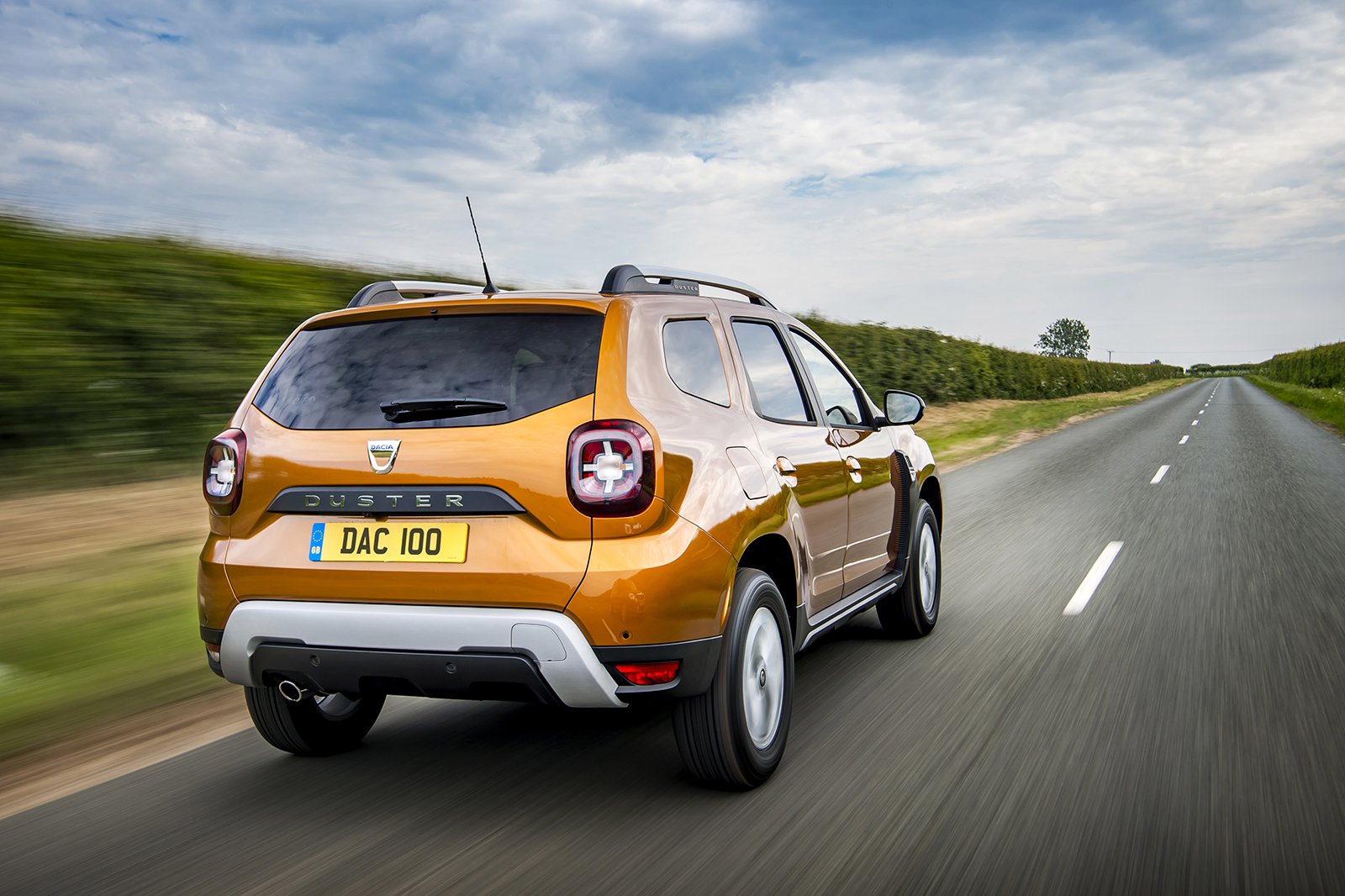 The Duster handles predictably enough, but its soft suspension means it leans over an awful lot in corners relative to something really tidy to drive, such as the Seat Ateca. Compared with its price rival, the MG ZS, it's also rather short on grip when you start to press on. Then there's the steering. It isn't as quick as the ZS's, but it does give you a pretty reasonable sense of connection to the front wheels, so the Duster’s low-ish grip levels rarely catch you out.

Its trump card comes if you order the four-wheel-drive version and head off-road, though. If your routine sees you taking on conditions more treacherous than a wet, gravelly track, you’ll be truly impressed with the Duster’s ability to tackle pretty much anything that other true off-roaders, including the Suzuki Jimny, can conquer.

Yes, you’ll wince a little as it rubs its chin or belly due to the limited ground clearance, but it has no trouble hauling itself up challengingly steep, rutted, muddy or sandy inclines, and will outwit many more road-biased SUVs, including the Ateca, Nissan Qashqai, Skoda Karoq, and two-wheel-drive only ZS.

The petrol engines – including the Bi-Fuel – are surprisingly hushed, with just the odd faint whine or cry under hard acceleration. The diesel is pretty free of raucous clatter, too, but it transmits noticeable vibrations through the steering wheel and the floor area around the pedals. Also, the manual gearbox has a very long and not particularly pleasant throw.

It's wind noise that's the main gripe. There's lots of it from the around the door mirrors and roof rails on the motorway; so much so that you'll barely notice the road noise. The ZS isn't much better, though, and this is one of the key areas where the pricier rivals – so again, the Ateca, Karoq and Qashqai – will give you a much calmer travelling environment in which to cover long distances.