A UN peacekeeping tour and the morning school run do have a number of things in common, if you think about it. The roads taken in both case will be crumbling and full of potholes, there’ll be a long convoy of cars taking very important people to the same place and parking will be at a premium when they get there. Used examples of large SUVs that can cope with both scenarios are few, but there is one that’s perfectly suited to either situation: the Toyota Land Cruiser.

Now it’s in its fourth generation, the Land Cruiser is a mainstay of traditional body-on-frame off-roaders, that also have long-travel suspension that’s perfect for keeping the tyres in contact with the ground while traversing arduous terrain. Except for the Mitsubishi Shogun Sport, there isn’t much to trouble a Land Cruiser off the beaten track.

The Land Cruiser was originally powered by a 3.0-litre diesel engine with 188bhp that could be had with either a five-speed manual or automatic. After the first of two facelifts, the engine was changed for a slightly smaller 2.8-litre diesel with 175bhp to help with emissions. A six-speed automatic and manual were both added to improve fuel economy, too.

If you’re interested in a Land Cruiser and hoping that it will be a refined and civilised vehicle, think again. When compared with rivals, the Land Cruiser is a big and wallowy beast that would rather travel through fields than stick to the Tarmac that snakes around them. The slow steering is vague; the long-travel suspension has the car pitching in bends and when accelerating or braking, and the engine and gearbox are tuned for better driveability at low speeds rather than outright performance, so it can be quite slow.

None of this will matter to those who are after a reliable mud plugger; they'll be much more interested in the Land Cruiser's off-road tech. More basic LC3 (later Utility) versions are still very capable, but from LC4, LC5 and Invincible models onwards gets goodies such as disconnectable anti-roll bars. Further up the food chain is air suspension and multi-terrain select (similar to Land Rover’s Terrain Response), which allows you to adapt the drive modes to suit the surface you’re driving on.

It is still a pretty practical vehicle and most versions come with seven seats. It's not quite as flexible as the Land Rover Discovery and Volvo XC90, mind, and the side-opening tailgate is very awkward to use in tight carparks, or when it’s windy. Also, because the boot floor is very high off the ground, getting things in and out of the Land Cruiser sometimes requires extra upper body strength.

Aside from the entry-level models, all versions of the Land Cruiser come with a decent amount of kit, although sat nav wasn’t standard until you went for top-of-the-range LC5 and Invincible versions. 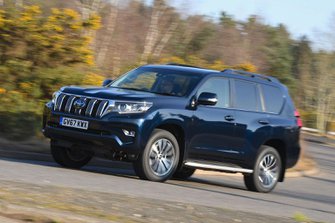