Few cars achieve iconic status and also define their own class, but the evergreen Volkswagen Golf GTI is one that has managed to do both. From its humble beginnings as a tarted-up version of the Mk1 Golf, its all-round competence and broad appeal have won the car the praise of motoring enthusiasts the world over and, in the course of a 40-year life, it’s gone on to spawn many hot hatch rivals, with some even borrowing those same three letters to emblazon their emboldened flanks.

The GTI recipe is actually pretty simple: take the standard Golf family hatchback – solid, refined and comfortable – and turn up the wick, adding properly increased performance, sharper handling and some subtle visual updates both inside and out to support its heightened sporting air.

This version is based on the seventh-generation of the Golf and was launched in 2013. It stayed on sale until it was replaced by an all-new model in 2020. You can have it as a three-door or five-door and it was the first to be offered in two versions: the standard GTI, with a 227bhp 2.0-litre turbocharged petrol engine, and the Performance Pack version, complete with a 10bhp hike in power, complemented by a limited-slip differential and uprated brakes.

On that note, drivers looking for even more thrills can get their kicks in the Golf R, a four-wheel-drive variant complete with a 306bhp version of the 2.0-litre engine and suspension tweaks including a lower ride height and a stiffened ride. Such added performance and kit actually come at a relatively small premium, so those looking for the ultimate Golf might care to give it a go.

The Golf GTI comes with high levels of kit, with cruise control, dual-zone climate control, LED headlights, heated sports-style seats, a configurable 12.3in digital instrument screen, an 8.0in infotainment screen with sat-nav, a DAB radio and Bluetooth all standard. You also get 18in alloy wheels, sports suspension, GTI bodystyling with twin exhaust tailpipes, more aggressive-looking bumpers and a rear diffuser.

Like the standard Golf on which it's based, the GTI was given a facelift in 2017, with styling tweaks and a new infotainment system, while the extra power in the Performance Pack version was upped to 15bhp. In 2019 the range was trimmed to just the Performance, with 242bhp, and the hot 286bhp TCR version.

But it’s on the road that even the regular Golf GTI shines. Make no mistake, there are hotter hot hatches – but the Golf GTI is the perfect combination of sheer outright fun and sensible performance. The engine is smooth, flexible and loves to rev, although most of its punch is concentrated where you would want it, in the mid-range. In the dual-clutch DSG automatic version of the Performance Pack variant, it’ll fly from 0-62mph in just 6.5sec.

It’s supreme in corners, too, with eager, variable-ratio steering, masses of front-end grip and excellent body control all leading to an ability to tackle country lanes taken quickly with confidence and make back-road blasting fun. Its handling is ultimately poised, fluid and adjustable, and its ride supple, but it doesn’t shout its intentions from the rooftops. There are rivals that are more vigorous and responsive, but you might argue that they lack the Golf GTI’s class.

For our money, we’d seek out the six-speed manual version of the car rather than the seven-speed dual-clutch DSG automatic one, because it’s smooth, slick and quick in operation, and lets you connect slightly more with this fine driver’s car. However, if most of your work is in town, you might want to think about the auto option.

It’s great to sit in, too. The driving position is spot-on and comfortable, and comes with a large range of adjustment. Visibility is excellent, and front and rear parking sensors are standard. The digitalised instruments are clear and easy to read, and the 8.0in high-definition touchscreen infotainment system is easy to operate (a 9.2in version is an option). The fit and finish is pure Golf, with impressive solidity and plenty of soft-touch plastics and good-quality materials. Added to that is a number of sporty details and reminders of GTIs past, such as the tartan-patterned seat option.

There’s plenty of space up front, and two rear passengers will have leg and head room to spare. Three abreast in the back is perfectly possible for short distances, too. There’s an easy-to-access boot of a very good size, with a height-adjustable floor and a flat loading bay when the rear seats are down. 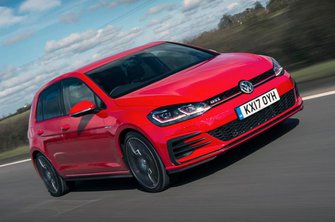