The 'C' in Volvo C30 is supposed to stand for coupe, but from most angle angles it looks distinctly like a hatchback, and unfortunately it hasn't proved a big hit with buyers.

Volvos have a reputation for practicality, but the C30 is more of a lifestyle hatchback. It has three doors, so won't appeal to those with children, and it doesn't have the prestige of some three-door rivals, such as the Mini.

It's based on the same platform as the S40 small family car, so it's good to drive with decent body control, but the ride is a little firm. Despite being described as a coupe it does has four full-size seats, but leg room is limited in the back and the boot isn't that big.

In reality, it's a halfway house; offering neither the flexibility of most small-family hatchbacks, nor the pleasure of an all-out coupe. 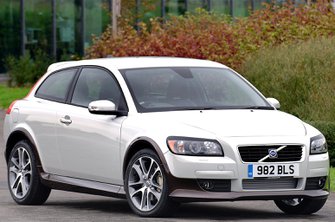