Volvo may have amassed a reputation for safety, but style is not a concept that’s been very often associated with the brand's cars. True, there have been a number of desirable and wonderfully designed Volvos in the past – models such as the P1800, 480 ES and C30 Coupé – but for the most part 'fit for purpose' perhaps better describes the cars that have coloured the marque’s history throughout the years.

However, more recently, Volvo has been on a bit of a roll, with a host of good-looking models that, in some cases, border on the striking; think of its large executive cars, the S90 and V90. Its handsome and popular large SUVs, the XC60 and XC90, were joined in 2017 by this smaller, more compact SUV, the XC40 – a car that oozes style both inside and out. But don’t think that it doesn’t cut it underneath its handsome bodywork, because we were so impressed by what it can do on the road and how good an ownership proposition it is that we crowned it our overall What Car? Car of the Year soon after it was launched.

And it seems to cater for all wants in this class. Under the bonnet is a range of four-cylinder engines that will be familiar to modern Volvo drivers. Petrols on offer comprise a 154bhp 1.5-litre T3 and two versions of the 2.0-litre engine: the 187bhp T4 and the 244bhp T5. In keeping with the times, a 258bhp plug-in hybrid joined the range in 2020 called Recharge T5. There are also two 2.0-litre diesels: the 148bhp D3 and 187bhp D4.

Trims with 'Pro' at the end of the name add adaptive LED headlights, heated front seats, an electrically adjustable passenger seat with memory function, headlight washers, a heated windscreen and 19in or 20in alloy wheels. Options worth seeking out include the Convenience Pack for its extra practicality.

On the road, the XC40 is a smooth and hushed performer, with a low level of wind and road noise, helping to make the interior a noticeably refined place in which to spend time. The T3 petrol needs to be revved rather hard, and with it the XC40 isn’t the quickest thing, so we’d suggest stepping up to T4 or the D3 diesel to fully appreciate the car’s virtues. Better still would be the T5 and D4, both of which have more than enough oomph. Indeed, the D4 is quite a flyer, and its flexible engine gives the car a refined and relaxing air that suits its undoubted suavity.

Fling it through a series of bends and the XC40 reveals itself as competent, though not inspiring. It leans a fair bit and the steering, while reasonably quick, is a little imprecise, but there’s plenty of grip. The car rides well, being composed and breezing over road ripples easily, although oddly it’s rather better on the ‘sports’ suspension fitted to R-Design models than the softer ‘dynamic’ suspension. Our experience of the car on the optional adaptive suspension so far suggests it’s not worth seeking a car out with this fitted.

Inside is an excellent driving position, with good visibility, a comfortable seat and plenty of adjustment. Digital instruments are standard and prove easy to read at a glance, and because the minimalist dashboard design carries few physical buttons, it’s easy to interpret those that are there. However, you do have to access quite a lot of functions through the 9.0in tablet-style infotainment touchscreen; this can actually prove to be a faff, but at least the screen is crystal-clear.

When it comes to interior quality, the XC40 is exceptionally classy. All the surfaces that you interact with regularly feel suitably upmarket, thanks to plush, soft-faced materials, smart wood veneer or metal highlights. Everything feels robust, too, so it should stand the test of time and the demands of family use.

There’s plenty of space up front, while rear passengers have enough leg and head room, although rivals such as the BMW X1 and Volkswagen Tiguan offer slightly more. On paper, the XC40’s boot is smaller than those rivals', too, but in everyday use it’s wide, deep and easily accessible, with a useful underfloor storage area. 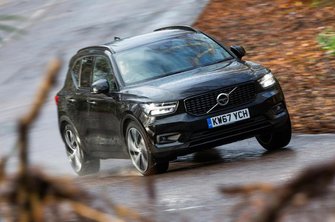