The Spyder’s colossal V10 petrol engine is wonderfully responsive from the minute you press the accelerator pedal. It’s naturally aspirated, rather than turbocharged, which means it responds quickly and rips through the rev range like a zip fly up a pair of new trousers. Its power builds progressively, really coming to life above 5000rpm and delivering a truly scintillating noise all the way up to the engine’s 8500rpm limiter. For most purposes, it has to be admitted the 562bhp of the standard R8 is probably all you need, but the added brutality of the Performance version is a drug that’s exceedingly hard to resist. Find a track where you can achieve it and it’ll top out at 204mph.

Having said that, the R8 in either mode can also play the comfortable grand tourer, if you want it to. Thanks to its high gearing, the V10 can cruise along quite quietly at very low revs, offering just the merest hint of the explosive potential of that very large and flexible muscle that sits inches behind the occupants’ heads.

Both versions of the R8 Spyder come with a seven-speed dual-clutch automatic gearbox. Choose to change gear manually, which you can do via the wheel-mounted paddles, and you’ll find the gearbox smooth and swift. Leave it in the auto mode and the changes are likewise quick, but progress in town traffic can occasionally be a jerky affair and a sharp kickdown can feel a little less suave than it should. There are four driving modes, though – comfort, auto, dynamic and individual – which allow you to soften or sharpen the car’s responses.

As far as its ride goes, the R8 Spyder is very impressive, feeling composed over all but the roughest of broken UK road surfaces. The body feels nearly as stiff as the coupé’s, which helps the comfort, and it’s well damped, even if you opt for the more stiffly sprung Performance version. You can have adaptive dampers as an option, but we reckon most will be happy with the standard set-up.

Approach a series of bends and the R8 Spyder is eager to impress. The steering is well weighted, responsive and direct, although ultimately keener drivers will find it doesn’t communicate information back from the road surface quite as well as one or two of its rivals. There’s no doubting the grip levels, however, which are at limpet-level.  The four-wheel drive system is rear-biased for playful dynamics, but it’s sure-footed and composed, and it never feels like it’s trying to catch you out. The four-wheel-drive system also adds some extra security on wet surfaces.

When the time comes to slow the R8 down, its brakes are no less impressive. The stopping performance is terrific and there’s lots of feel, and you can upgrade to the ceramic brakes that come as standard on the Performance model. These offer much the same ultimate stopping performance as the standard brakes, but will resist fade for longer during bouts of fast driving, such as when on a track. Just be aware that they introduce a rather firm pedal feel and are harder to modulate around town.

With the roof up, the Spyder is well insulated from wind noise, although almost inevitably there’s some road noise at speed. Drop the roof and install the wind deflector behind you and the buffeting is more than acceptable, even at motorway speeds. 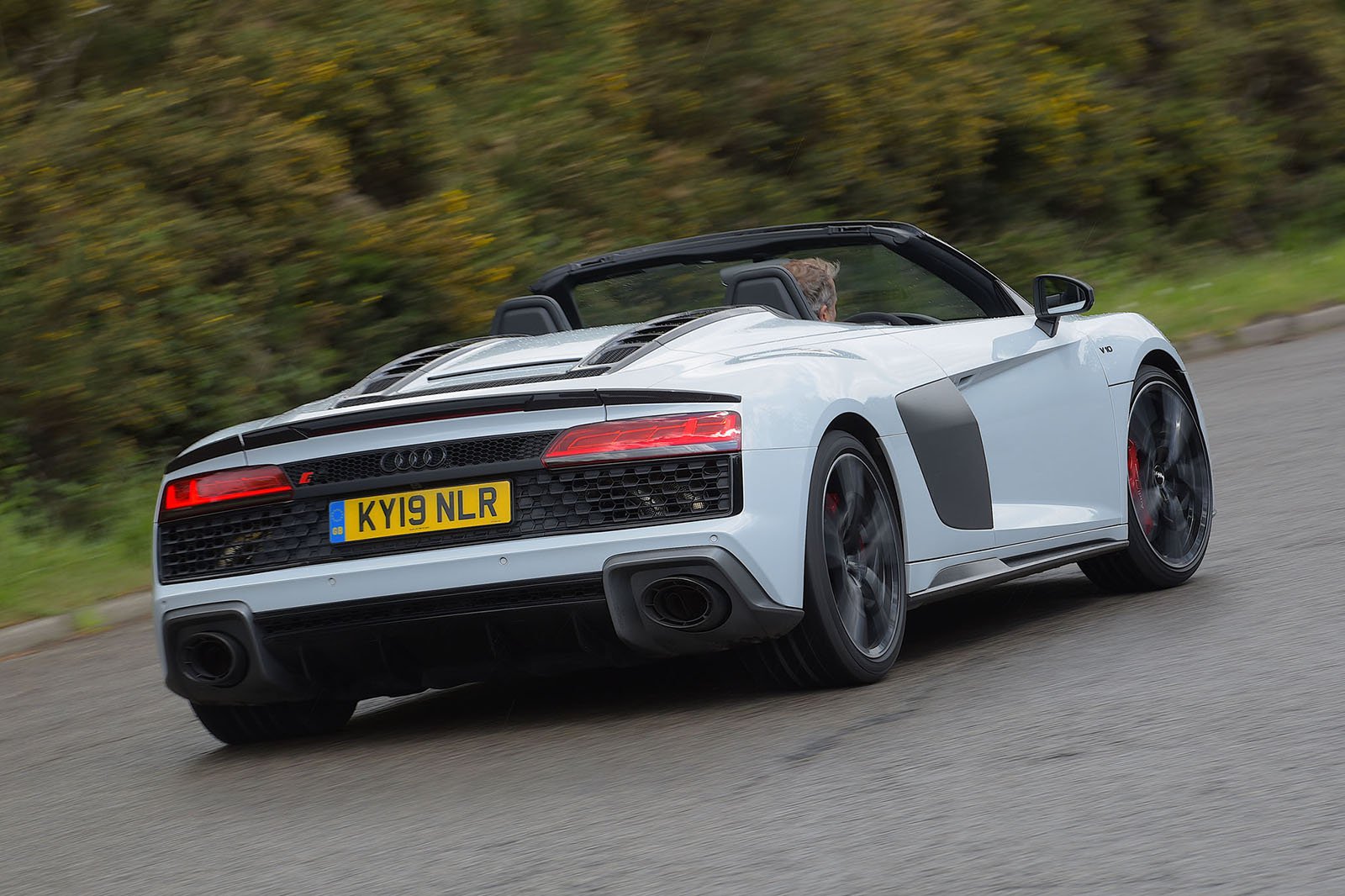 Looks and sounds fantastic, but not the best-handling converti...