If you were asked to describe the BMW 4 Series Gran Coupé, you’d have to say it was a four-door saloon, with the swoopy looks of a coupé and the practicality of a hatchback. Then you’d have to deal with the puzzled look adorning the face of whoever asked you. Shame, really, because while it may sound like pretty confusing, in actual fact it’s a rather good car.

Inside, the dashboard is closely related to the BMW 3 Series and material quality, on the whole, is good. The majority of the controls and switches you interact with work in a precise, well-damped fashion. However, it’s not hard to spot some hard, scratchy plastic, and when you compare it with the interior of the Audi A5 Sportback, the 4 Series Gran Coupé doesn’t feel quite so luxurious. The driving position is compromised slightly because the pedals are offset to the right, but all the major controls fall easily to hand.

You have to climb over the rear wheel arch to get into the back seats but, when you do, space for the outer two seats is fine and equal to that of a 3 Series. Despite the sloping roofline, there’s enough head room for most, although the centre rear occupant won’t be quite so well off.

The boot may have a bit of a lip to negotiate, but it is a useful square shape and comes with split-folding rear seats. With all the seats down, maximum capacity is not far off that of the 3 Series Touring, meaning the 4 Series Gran Coupé can cope with the odd Ikea trip.

Where this car really shines is in the way it drives. The entry-level engine is the 420i, a turbocharged four-cylinder petrol unit that can sometimes feel a little weak unless you absolutely nail it. Better is the 430i, a more powerful version of the 420i. But if you can stretch to it, the six-cylinder 440i is wonderfully refined, yet has a real sporting edge to its note and proper, hairy-chested performance.

Diesels start with the 420d, an engine that is far more flexible and fuel efficient than the 420i. Our only complaint is that it is a little unrefined compared with the equivalent oil-burners in the Audi A5 and Mercedes-Benz C-Class Coupé. A better bet is the automatic-only six-cylinder 430d, because it’s far smoother, has massive mid-range surge for truly effortless pace and yet is also impressively frugal. There's also a 435d xDrive that’s certainly fast, but also rather expensive to buy.

Unlike the 3 Series Gran Turismo, the 4 Series Gran Coupé handles just as well as the car on which it’s based. The steering is responsive and allows you to accurately place the vehicle on the road. It’s more involving than the A5 Sportback, which can be a little bit heavy at times and doesn’t offer much feedback. The 4 Series Gran Coupé also benefits from rear-wheel drive, but you can find models with four-wheel drive if you live in an area that experiences snow.

Aside from the fine handling, the ride – especially when equipped with adaptive dampers – treads the fine line between passenger comfort and body control. Where the standard suspension (particularly the standard M Sport suspension) can thump over bumps and potholes, the adaptive version can be set to Comfort, which takes the edge off the very worst jolts. Avoiding anything with 19in wheels helps as well.

Find a used BMW 4 Series in the What Car? Classifieds here 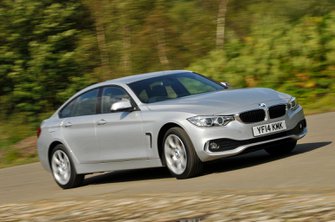