The BMW i8 is not a typical sports car. You can tell as much just by looking at it, with the low nose, bold colour combinations and wild buttresses providing a genuine wow factor. What’s more, for a fairly out-there piece of design the i8 is ageing extremely well. A mild facelift in 2018, which also introduced a convertible Roadster version, only added to the sense of drama of this undeniably wild-looking vehicle. It survived until 2020, when BMW switched its attention to the production of an all-new range of electric vehicles.

As much is true of the technology within, which of course is the other point that differentiates this machine from sports car rivals such as the Porsche 911 and Audi R8. That is because rather than a large petrol engine, the i8 instead uses a 228bhp, 1.5-litre three-cylinder turbo, which is mounted behind the passenger compartment and drives the rear wheels. It is joined by a 129bhp electric motor that powers the front axle, making the i8 four-wheel drive. The gearbox is a six-speed automatic.

And, while the i8 isn’t alone anymore in being a hybrid sports car, the Honda NSX goes without plug-in technology, while the Porsche 918 Spider and McLaren P1 supercars cost several times as much as this car. Due to the extensive use of carbon-fibre in its construction the i8 is also light, which allows it to accelerate from 0-62mph in just 4.4 seconds, and keep going all the way to the obligatory 155mph limiter at a rate that has you pinned into the bucket seat.

Throw in a surprisingly meaty soundtrack from the three-cylinder engine and the i8 feels genuinely exciting to drive. It handles well too, with very quick steering, a pointy front end and lots of grip, although ultimately the lack of feedback through the wheel stops it from being as much fun as its rivals from Porsche and Audi.

The ride is also firmer that you’ll find in a 911 or R8, and there’s a fair bit of road noise, but the i8 counters by being able to run silently on electric power for around 20 miles between charges. Indeed choose one of the updated and facelifted cars from 2018 onwards and its claimed range rises to 34 miles. That is because it is a plug-in hybrid, meaning it can run either in pure electric mode or with petrol engine and electric motor working together (or even with the petrol engine acting as a generator to charge the battery), which in turn results in potentially tiny running costs.

Like the Porsche 911, it also makes an effort to be practical on account of its 2+2 seating layout. However, the two rear seats are tiny and very difficult to access, so don’t expect anybody other than kids to want to use them. The front seats are also fairly difficult to get into due to the car’s low roof, butterfly doors and wide sills, but once you’re in the i8 feels like a pretty special place to be, with swooping panels in chrome, leather and high-quality plastics, two large digital screens for the speedo and infotainment, and some terrific ambient lighting.

If you're interested in finding a used i8 head over to the Used Car Buying pages to find lots of cars listed for sale at a great price. 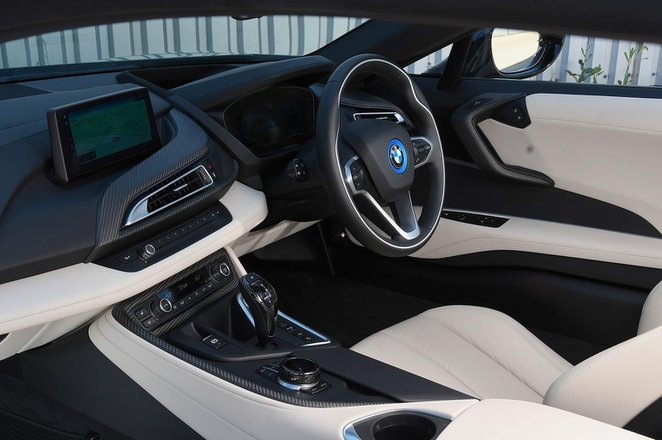