It is rare that a city car-sized five-door hatchback wildly captures the imagination of the automotive industry, but when pictures of the Honda E were first released there was a fevered clamour for more details.

Its cutesy, retro styling turned heads and dropped jaws at motor shows, with onlookers admiring its circular headlight design, flush door handles, cameras instead of door mirrors and a general impression that this car took its inspiration from a much-missed bygone era.

Don’t be fooled by the nostalgic nature of its design, though; this is actually a fiercely futuristic car – Honda’s first fully electric model, no less. It’s available in two versions, with two different power outputs. Both will seat four, and come with a whole lot of hi-tech looking screens on the inside.

So what’s the catch? Surely this is a style-conscious technophile’s dream set of wheels, a game-changer in the making.

Well, it’s not quite as easy as that. Two hugely important factors likely to determine an electric car’s chance of success are its battery range and price, and plenty of the E’s rivals strike a commendable balance between the two. The Seat Mii Electric and Skoda Citigo e iV are tiny yet mighty, each packing a decent range while undercutting much of the competition; the Renault Zoe is a highly polished electric car package with a fantastic range and plush interior. The MG ZS EV, meanwhile is enormous and cheap, while the big-range Hyundai Kona Electric is another tempting choice.

So, with this in mind, how exactly does Honda’s first electric car compare to its rivals? To find out everything you need to know; read on.

And if an electric future appeals to you, check our New Car Buying pages to find a great EV deal. 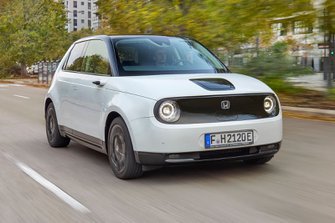