The Mini Electric is a bit like a Georgian-style country house that’s just been built. No, not because it’s made from bricks and shaped like a box – rather because it takes the appealing aesthetics of yesteryear and fills them with thoroughly modern internals.

That’s right, the Mini might have its roots in 1959, but this one has the heart of a Generation Z eco-warrior.

As you’ve undoubtedly already guessed from the name, this is indeed a Mini than runs purely on electricity – the first of its kind that you can walk into a dealership and buy. And if you do that, you might be surprised to find that you’ll be spending less than you would on an equivalent petrol-powered Cooper S version, even though, with 181bhp, the Mini Electric is very nearly as powerful. That’s partly because it's attractively priced by electric car standards, but also because you’ll get a grant of £3000 from the government to help.

But before you rush to put your deposit down, it’s worth bearing in mind a couple of things. Firstly, one of the reasons the Mini Electric is temptingly priced is that it doesn’t have a very big battery, limiting the number of miles you’ll be able to do before plugging it in again. Secondly, squeezing the battery under the rear seats has reduced the amount of space in the back compared with the conventionally powered versions – and there wasn’t a huge amount to begin with.

Do these issues make the Mini Electric less recommendable than its similarly priced rivals, including the Renault Zoe, Honda E and Peugeot e-208? Read on over the next few pages and we’ll tell you all you need to know.

And whichever car you end up deciding to buy, make sure you check out our New Car Buying pages to see how much you could save without any awkward haggling. 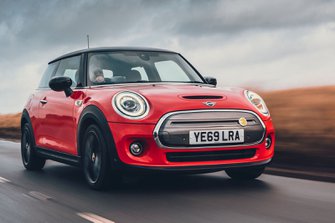 Great to look at and to drive – but the high price and meagre...