The GLC Coupé’s engine range mirrors that of the GLC SUV, so things kick off with the 220d; a 2.0-litre diesel with 191bhp. Despite being the range’s entry point, the 220d proves to be plenty quick enough on the road, whisking you up to motorway speeds without fuss. There’s plenty of low-end shove so you don’t have to work it particularly hard, either. A punchier 242bhp version badged 300d is available, but we don’t think it’s worth the extra.

But we suspect the petrol engines will be of more interest to UK buyers. The GLC 300 has 254bhp and matches the 300d for 0-62mph acceleration. However, on the road, there’s a more noticeable performance gap as the petrol needs working harder than the diesel, should you need some urgent acceleration. Again, we’d stick to the more affordable 220d. A pair of plug-in hybrid models are also available in the shape of the petrol 300e and diesel 300de. We’re yet to try them, although their electric ranges aren’t as impressive as those of the BMW X4 30e plug-in hybrid.

For those after a properly quick coupé SUV, the 385bhp GLC 43’s twin-turbocharged petrol V6 feels rapid, no surprise given the 4.9sec 0-62mph time. You don’t have to rev it hard to make swift progress, but you’re treated to a tuneful exhaust note if you do. If you want to go even quicker, you’ll need the 4.0-litre V8 powered GLC 63; it packs a whopping 503bhp. For more info on this, take a look at our dedicated GLC 63 review.

Regardless of engine, you get a nine-speed automatic gearbox as standard. It changes gear smoothly and, despite being a little hesitant at low speeds, it’s still more responsive than the Range Rover Velar’s gearbox. Both are beaten by the BMW X4’s excellent automatic ‘box, though. AMG models have tweaked nine-speed automatics that are a little jerkier at low speeds, but are able to shift quicker in their racier driving modes.

Both diesels are impressively hushed at a cruise and stay pretty smooth when you’re accelerating, too. They may not be quite as impressive as the Audi Q5’s 40 TDI engine, but they run the BMW X4’s 20d lump very close indeed. The 300 petrol is even better, sending fewer vibrations through the controls and proving less vocal, too. It even does a passable impression of a six-cylinder engine in Sport mode thanks to some trickery that uses the stereo speakers. Of course, it’s not quite as smooth as the 43, which does actually have six-cylinders. However, the quieter engines do less to mask the pronounced road roar that filters up from the tyres. That’s especially true of the wide-tyred AMG models.

The GLC coupé gets the same variable steering set-up as the GLC, but it's been made slightly quicker to give a sportier feel. In truth, while it's fairly precise, it still feels unevenly weighted and uncommunicative. There's no doubt that the Porsche Macan better communicates what the front tyres are up to. Grip levels are decent enough, but the GLC never feels as agile or entertaining as the BMW X4. It’s a similar story with the GLC 43; it can corner very quickly, but never entertains like a Porsche Macan S or a BMW X3 M40i.

With the standard coil-sprung suspension, and even on relatively small 19in wheels, the GLC coupé is rather firm, picking up on road imperfections all too readily and thumping through potholes. It rarely makes you wince, but the Range Rover Velar is comfier, while a BMW X4 with the optional adaptive suspension rides and handles better. 43 and 63 AMG models get their own specific air suspension system as standard. However, even in Comfort mode, you’re more aware of sharp-edged potholes and pimples passing beneath you than you are in regular models. 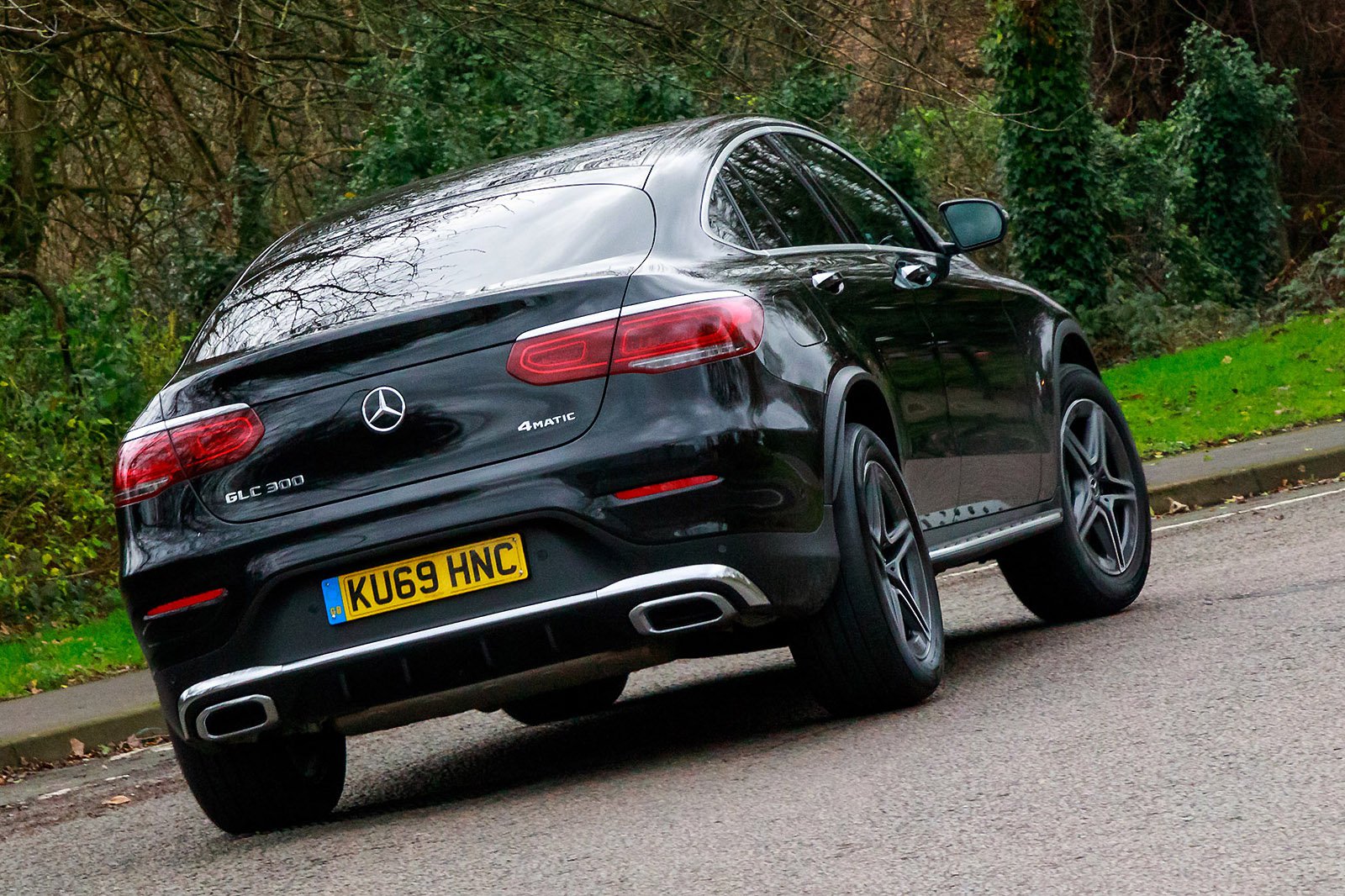