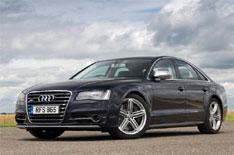 The new Audi S8 is the most powerful A8 ever. It's been designed to blend supercar performance with all the luxury you'd expect from a limo, and it will compete with cars such as the Jaguar XJ Supersport and Mercedes S63 AMG. However, priced at 77,900, the Audi S8 is a good deal cheaper than its rivals.

What's the 2012 Audi S8 like to drive?
It might not look much different from a regular Audi A8, but the S8 has more in common with the R8 supercar when it comes to performance.

Under the bonnet is a new twin-turbo 4.0-litre V8 petrol engine, which dishes out its 513bhp to all four wheels. That's enough power to slingshot you from 0-62mph in 4.2 seconds quicker than those rivals from Jaguar and Mercedes.

The numbers are nothing compared with the sensation, though. Prod the throttle like you mean it and you hear the eight-speed automatic gearbox kick down as a signal of what's to come. After this initial pause, the engine snarls into life and the car accelerates with the sort of unrelenting urgency that you'd think unfathomable for a car weighing just shy of two tonnes.

However, while the S8 is able to give most supercars a fright in a straight line, don't expect miracles when the corners start coming. The big Audi has immense grip and traction, but the car's considerable size and weight means it doesn't like changing direction in a hurry. The steering isn't blessed with much feedback, either, and the shortage of self-centring action is a little disconcerting.

Audi S8 has performance car pace - in a straight line

What the S8 is extremely good at, though, is eating miles on the motorway. Audi's Active Noise Cancellation system works in much the same way as noise-cancelling headphones, by suppressing external noises that find their way into the cabin. The double-glazed windows help keep it out in the first place, so the cabin is impressively quiet at high speed.

The ride is reasonably comfortable with the air suspension in its Comfort setting, too, even if the S8 isn't as cosseting as the best luxury cars.

Not the most cosseting of luxury cars

The S8 also has some neat tricks up its sleeve to improve fuel efficiency. Most impressive is the Cylinder on Demand system, which shuts off four of the eight cylinders when cruising to save fuel. A stop-start system is also standard.

Granted, the average economy figure of 28.0mpg isn't likely to make the S8 a contender for any environmental awards, but the Audi is still more efficient than an XJ Supersport or S63 AMG.

What's the 2012 Audi S8 like inside?
The S8's cabin is virtually indistinguishable from that of a regular Audi A8, which means all the materials are beautifully textured and the interior panel gaps are millimetre-perfect.

The S8's cabin is beautifully put together

The standard A8 isn't as roomy as a BMW 7 Series, or even some family hatchbacks, but there's plenty of space for four six-footers, and all the seats are comfortable and supportive.

Aside from a few S8 badges used sparingly around the cabin, there isn't much to hint at the Audi's massive performance potential, but that's the point. A big part of the S8's appeal is its understated look, so the visual emphasis is placed firmly on luxury rather than sportiness.

The equipment list is as impressive as you'd expect from a top-of-the-range limo. The S8 gets sat-nav with online services (such as Google Local Search), a BOSE surround sound audio system, air suspension, a self-parking system and 20-inch alloys as standard.

VIPs should have just enough room in the back

If you do want to add extras, you can also have 21-inch alloys and ceramic brakes.

Should I buy one?
The S8's appeal is limited in the extreme. However, for those few buyers who want both the luxury of a limo and the straight-line performance to embarrass all but the most exotic of performance cars, the S8 does a good job. It's also comparatively good value, undercutting its closest rival, the Mercedes S63 AMG, by more than 30,000.

However, given that the S8 isn't all that much fun to drive, we can't help thinking that performance-hungry buyers would be better off with the 4.2 V8 diesel version of the A8. It's almost 10,000 cheaper to buy, is almost as quick in the real world and it will go around 200 miles farther between fill-ups.

Or, if you're looking for something exciting, try the Mercedes CLS63 AMG.

Read the full Audi A8 review >>