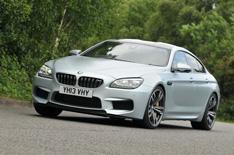 The new BMW M6 Gran Coupe is the third high-performance M version of the 6 Series, joining the M6 Coupe and M6 Convertible.

A rival to the Mercedes CLS63 AMG and Porsche Panamera Turbo, it uses the same 552bhp twin-turbo V8 as the other M6s, and can hit 62mph in just 4.2 seconds.

BMW has fitted bespoke 19-inch alloys (20s are optional) and beefed-up the styling to help the new M6 stand out from lesser versions of its sleek, four-door Gran Coupe. Theres also a carbonfibre-reinforced plastic roof, which lowers the centre of gravity.

Whats the 2013 BMW M6 Gran Coupe like to drive?
Put your foot down and the M6 accelerates with the ferocity youd expect, and theres barely any let-up even when you reach autobahn speeds.

You only need the smallest of gaps to carry out overtaking manoeuvres, then, but the straight-line performance is only part of the story.

The M6 features bespoke alloy suspension and a trick limited-slip differential, plus BMW has swapped the regular Gran Coupes electro-mechanical steering for a hydraulic set-up in an effort to improve feedback.

Sure enough, the M6 Gran Coupe feels very agile for a car that weighs the best part of two tonnes, but its size can be an issue on back roads and its not as involving as it should be because the steering still feels quite remote.

The standard twin-clutch gearbox is harder to fault, letting you switch between smooth automatic shifts and ferociously fast manual ones at the touch of a button.

Whats more, the M6 Gran Coupe is a surprisingly comfortable cruiser when you put the adjustable suspension in its softest setting.

The engine sounds powerful when you rev it yet is virtually silent on the motorway, while wind noise is also well suppressed. However, the big tyres do generate a fair amount of road noise.

Whats the 2013 BMW M6 Gran Coupe like inside?
It feels a bit more special than lesser versions of the Gran Coupe, thanks to an elegant sports steering wheel and a cluster of buttons that allow you to quickly adjust the suspension, steering weight and gearshift speed.

True, most of the other switchgear is shared with much cheaper BMWs, but this does mean you get the companys intuitive iDrive infotainment system.

Theres plenty of space in the front, too, and the standard sports seats are hugely adjustable. However, anyone approaching six-feet tall will find their head rubbing on the rooflining in the back.

The M6 Gran Coupe is technically a five-seater, but its transmission tunnel is so big that the central rear seat is suitable for only very short journeys.

Greater nods to practicality are the folding rear seatbacks, which are released by levers located on the sides of the boot. When folded, they boost luggage capacity and allow a couple of sets of golf clubs to be loaded lengthways.

Should I buy one?
The M6 Gran Coupe is a hugely desirable car, but it looks overpriced at almost 100k.

BMWs own M5 offers all the same virtues, bar the stunning looks, for around 24,000 less, while the Mercedes CLS63 AMG undercuts the Gran Coupe by 15,000, despite being just as striking to look at and similarly fast.

The CLS also sounds better and offers more accurate steering, so its where our money would go.

By Steve Huntingford and Will Nightingale