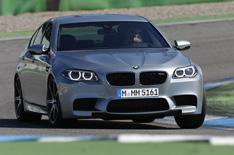 BMW has announced a new Competition Package for its M5 and M6 model lines, which become the most powerful production cars the company has ever made.

The M5 and M6 models with Competition Package are due to arrive in the UK later this year, with power boosted by 15bhp to 567bhp.

BMW has given the standard M5 saloon a face-lift in line with the rest of the 5 Series range, as well as adding M styling features such as the double-spoke grille and steering wheel already seen in the M6.

As well as the power hike, the Competition Package adds Sport suspension settings and steering. It also includes a sports exhaust with black chrome tailpipes, 20-inch alloys and tweaks to the differential to allow more slip before the stability control kicks in.

The updated BMW M5 saloon, as well as M5 and M6 models with Competition Package, are on sale now, with the first customer deliveries expected from the end of July.