More for you |
The biggest British driving mythsThe safest cars on sale todayPromoted | Is an electric car right for me?What’s the best practical convertible car for me? Best used small SUVs for less than £15,000
Home
News
2013 Mercedes S-Class previewed
news 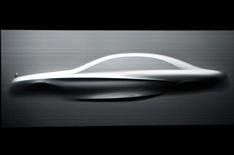 The 2013 Mercedes S-Class has been previewed by a new sculpture called Aesthetic S, which will be shown at the 2012 Paris motor show later this month.

Mercedes describes the Aesthetics S as an 'artistic glimpse of the design of the luxury saloon of the foreseeable future'.

A number of images of the relief-style sculpture have been released, in which it's possible to make out the overall shape of the car, the side window profile and the 'character lines' along its sides.

Although the proportions appear similar to those of the current Mercedes S-Class, there are similarities to Mercedes' Concept Style Coupe a concept car that was revealed at the 2012 Frankfurt motor show. The CSC previews a new compact saloon based on the new A-Class.

The new Mercedes S-Class is expected to be unveiled in production form at the 2013 Detroit motor show in January, before it goes on sale next spring.

It'll be packed with high-tech equipment, including a system that uses cameras to read the road ahead and adjust the suspension accordingly. A two-door coupe version is expected to join the range; it'll replace the current Mercedes-Benz CL.