New start-up company Rivian will sell a Tesla Model X-rivalling electric SUV from 2021, and this is everything we know about it so far...

These closely related models are electric, and Rivian is positioning itself as a maker of premium electric off-roaders. It considers this to be an untapped niche, and unlike most start-up car makers, its vehicles are not simply CGI renderings or far-off fantasies, but real, working products that are ready for prodution. 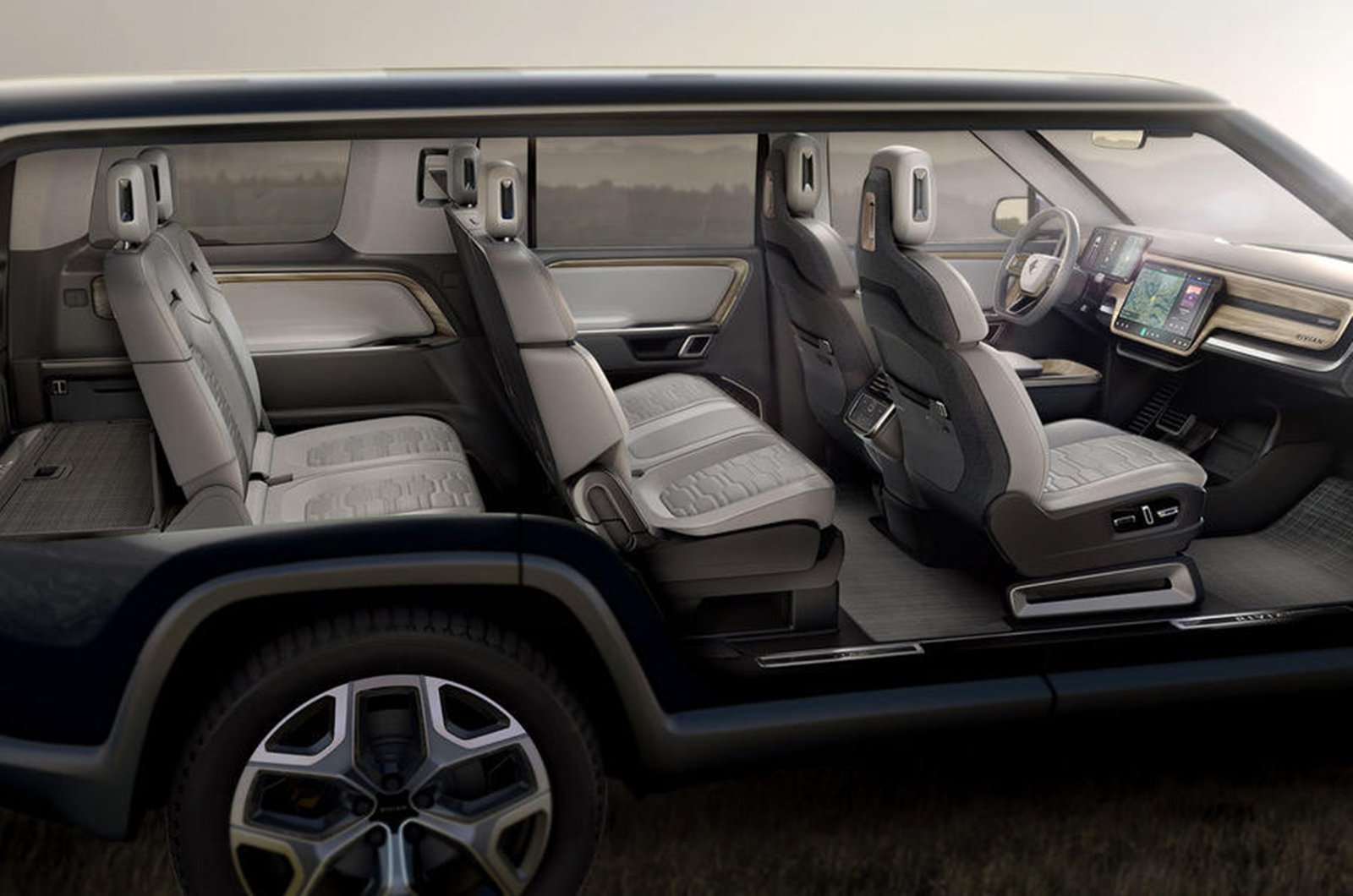 Most intriguing of the brace of new models is the R1S. It's the same size as the Tesla Model X and Audi Q7, but in its go-anywhere ability, it has more in common with the full-size Range Rover.

It's built on a dedicated new architecture designed to realise the full benefits of electric power. The batteries are all mounted in the floor and three different pack sizes are offered: 105kWh for a 240-mile range, 130kWh for a 310-mile range and 180kWh for a 420-mile range.

As for charging times, Rivian says you’ll be able to get around 60 miles of range in a coffee break and 200 miles can be achieved in 40 minutes.

There are four electric motors, one powering each wheel, giving the R1S four-wheel drive and combined outputs of 754bhp and 826lb ft of torque. This is important for off-road driving, because it allows for full independent control of each wheel. While off-road performance is claimed to be impressive, the same is true for on the road. The R1S can crack 0-60mph in 3.0sec and 0-100mph in less than 7.0sec.

Rivian namechecks the Porsche Cayenne Turbo as a car the R1S is designed to perform alongside on the road, while Land Rover is referenced for off-road performance. Rivian believes these targets are achievable due to the benefits of electric power. 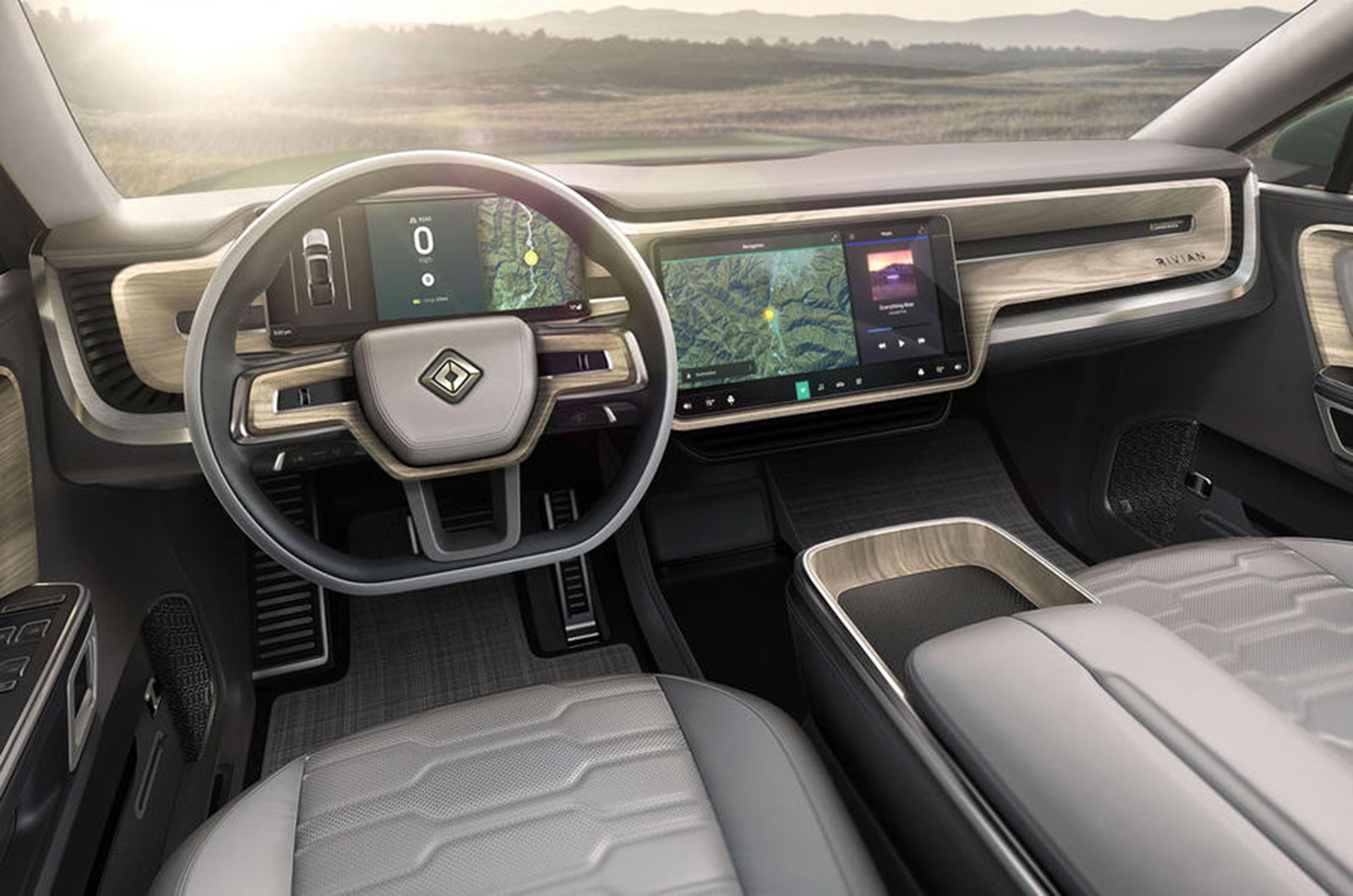 The off-road theme continues inside the R1S’s spacious, modern interior. Rather than leather and chrome, it features natural woods and special wipe-clean fabrics, similar to those used on high-end outdoor sportswear from brands like Patagonia.

There are two screens inside, one for the driver’s instruments and a touchscreen for infotainment. The design and software are Rivian’s own, and it updates wirelessly. Rivian has recruited a senior ex-Apple figure to lead its software development.

The R1S's second and third row of seats fold flat, but Rivian is yet to confirm a luggage volume for the rear. In the front, under the bonnet, there's a 330-litre area that should give the R1S an exceptional total storage figure.

The R1S is on display at the Los Angeles motor show this week. It will go into production in the US in early 2021 at a factory formerly owned by Mitsubishi. US sales are the first goal for Rivian, but it plans for a European launch within 12 months, including in the UK in right-hand drive.

It’s too early for any confirmed pricing, but it will cost around $70,000 (£55,000) in the US. Typically with American pricing, you can switch the dollar sign for a pound sign for a good look at how much it will cost in the UK. 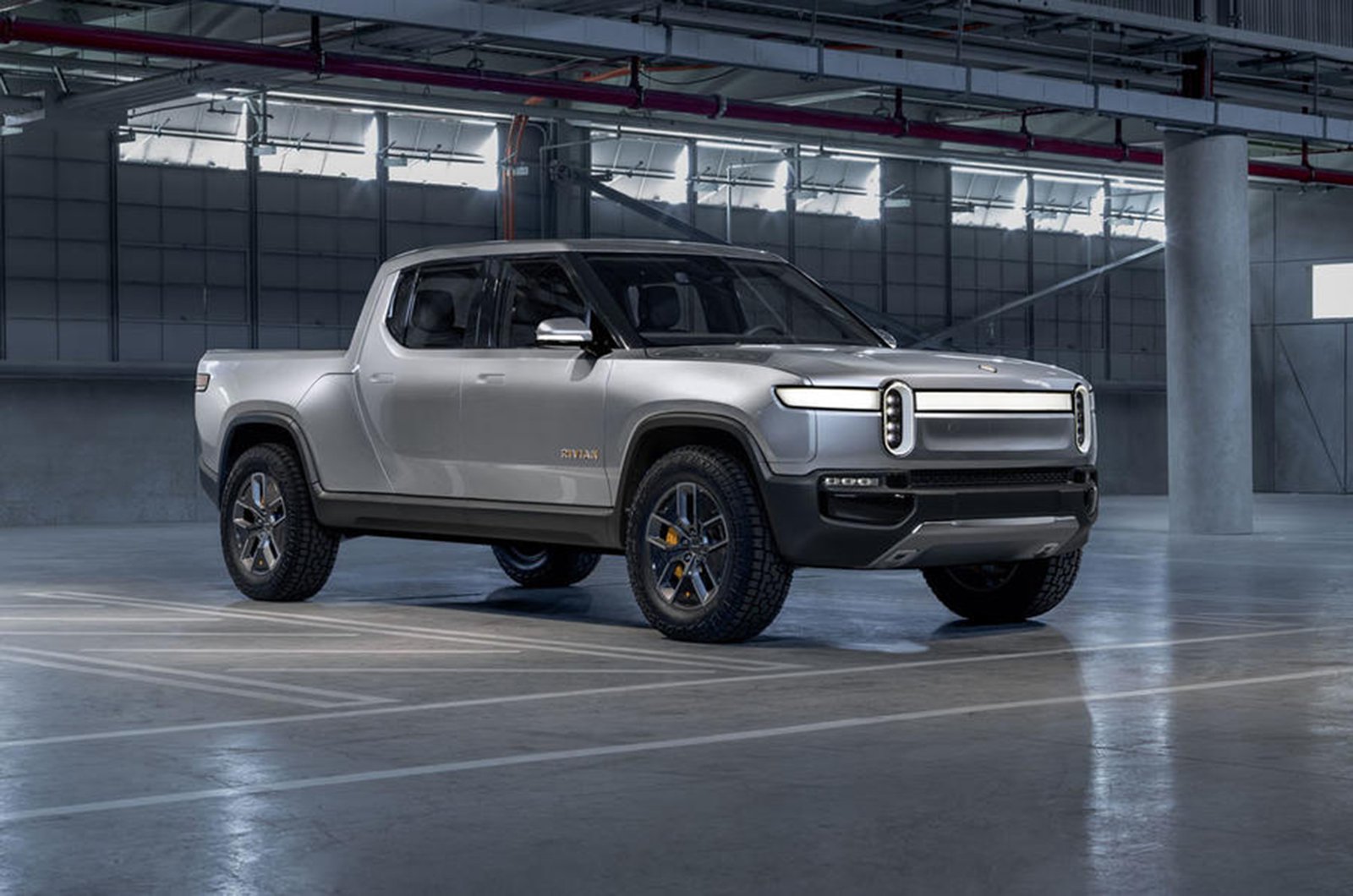 The R1S is joined at Rivian’s launch by the R1T pick-up truck. The two models share their underpinnings, electric powertrain, and battery pack options. The R1T has a payload of 800kg and a towing capability of five tonnes, which Rivian considers to be a conservative estimate.

The R1T will also come to the UK; it will enter production in the US a couple of months before the R1S and be the model Rivian launches its brand with.

There was a time when attempting a top ten list for used electric vehicles was impossible; there simply weren’t enough of them. However, with the improvements in battery technology, the growing concern of localised pollution levels and the fact that EVs no longer perform like overloaded milk floats, demand for them is growing.

EVs are certainly not new technology and have in fact been around since the invention of the car. They were often preferable in major cities because they didn’t smell and, unlike the horse, didn’t produce any waste. But it’s only been in the past 10 years that manufacturers have made a concerted effort with electric cars, producing a wide range of EVs in different shapes and sizes.

Our top ten has everything from small city cars to top-of-the-range luxury SUVs to whet your appetite; some of them are cheaper than others, but all of them represent the best of their type. Read on to find out what are the best used electric cars you can buy.

Basing your electric car on the cute little Up is not a bad place to start since it’s one of the best city cars on sale. And, in some ways, the e-Up is even better. For starters, if you need an automatic car, the smooth electric motor and instant torque make the e-Up a swift urban runabout. Second, the additional weight of the batteries helps to settle the ride over the standard car. Plus, the batteries are neatly hidden beneath the seats, so there’s no loss of interior space.

Trouble is, because the battery pack is so small, the range is only really 66 miles, which limits it to those who mostly do urban driving and have easy access to a charge point. It is also quite expensive compared with a conventionally powered Up. However, if you regularly commute into central London, not needing to pay the congestion charge is useful. A 7kWh charger will refill your e-Up in about six hours, while the rapid-charging facility means you can be back in action in 30 minutes.

Find a used Volkswagen Up in the What Car? Classifieds

The Kia Soul EV is proof that electric cars need not look boring. And it’s still a highly practical five-seat family car that’s much cheaper to run than the standard car. Equipment levels are pretty decent with climate control, heated front seats, cruise control, sat-nav and a reversing camera. A home charger should recharge a fully depleted Soul in six hours, while a fast charger will get the battery to 80% in about 30 minutes.

Find a used Kia Soul in the What Car? Classifieds

Some of you who are really switched on will know that the Ampera does, in fact, have a petrol engine and is, therefore, an outlier in our list. However, this Vauxhall (and the Chevrolet Volt it is closely related to) operates as an electric car most of the time, only using the petrol engine if you need to travel further than its electric range can manage and there’s no access to a charging point.

If you do regularly charge it up, then 40 miles of electric range should see you to work without issue, and if you have access to a dedicated wall charger, then it’ll only take four hours to replenish your electric range. While they only sold the Ampera for three years, there are a few higher-mileage examples out there under £10,000, making the Ampera a cut-price EV for those wanting to be green.

Find a used Vauxhall Ampera in the What Car? Classifieds