The ultra-low cost, uniquely designed Citroën Ami electric two-seater is being considered for UK sale. Does it make sense?...

Your head turned, didn’t it? What exactly is that car?

Well, it’s the Citroën Ami, and technically it’s not a car, but rather a large electric quadricycle that in some European countries can be driven by 14-year-olds without driving licences. That means performance is restricted to a top speed of 28mph, while the range is just 43 miles.

Perhaps sensibly, UK regulations demand that you are 17 and fully licensed to drive one here. It’s worth noting, too, that Citroën’s UK arm is still weighing up whether to put it on sale, although the avalanche of publicity it has drawn to date suggests it probably will.

In that respect, the Ami is a rolling advert for many of the values Citroën has sought to emphasise in its recent bid to stand out from the crowd. It’s wildly different, certainly, and undeniably a quirky, alternative take on getting around in towns and cities that are increasingly dominated by e-bike and e-scooter hire opportunities. But, of course, it is also polarising – based on our experience, its looks alone charm and appall in equal measure.

There’s no denying its ingenuity, though. There’s seating for two plus luggage, although it’s notable that for all its Dinky Toy appeal and clever design touches, at 2.4m long and 1.4m wide it’s not really much smaller than a Smart ForTwo EQ, or even four-seat rivals such as the Fiat 500 and Volkswagen Up. A Renault Twizy is even smaller, in fact. The exterior panels swap front to back and side to side to reduce manufacturing and repair costs, and its neat features include a three-pin charging cable tucked inside the door frame.

The European pricing suggests it would retail in the UK for approximately £6000. More likely, people would drive one under a hire scheme, paying a deposit of about £2500 then a weekly rental of around £20, or via short-term rental at 25p a minute or so. 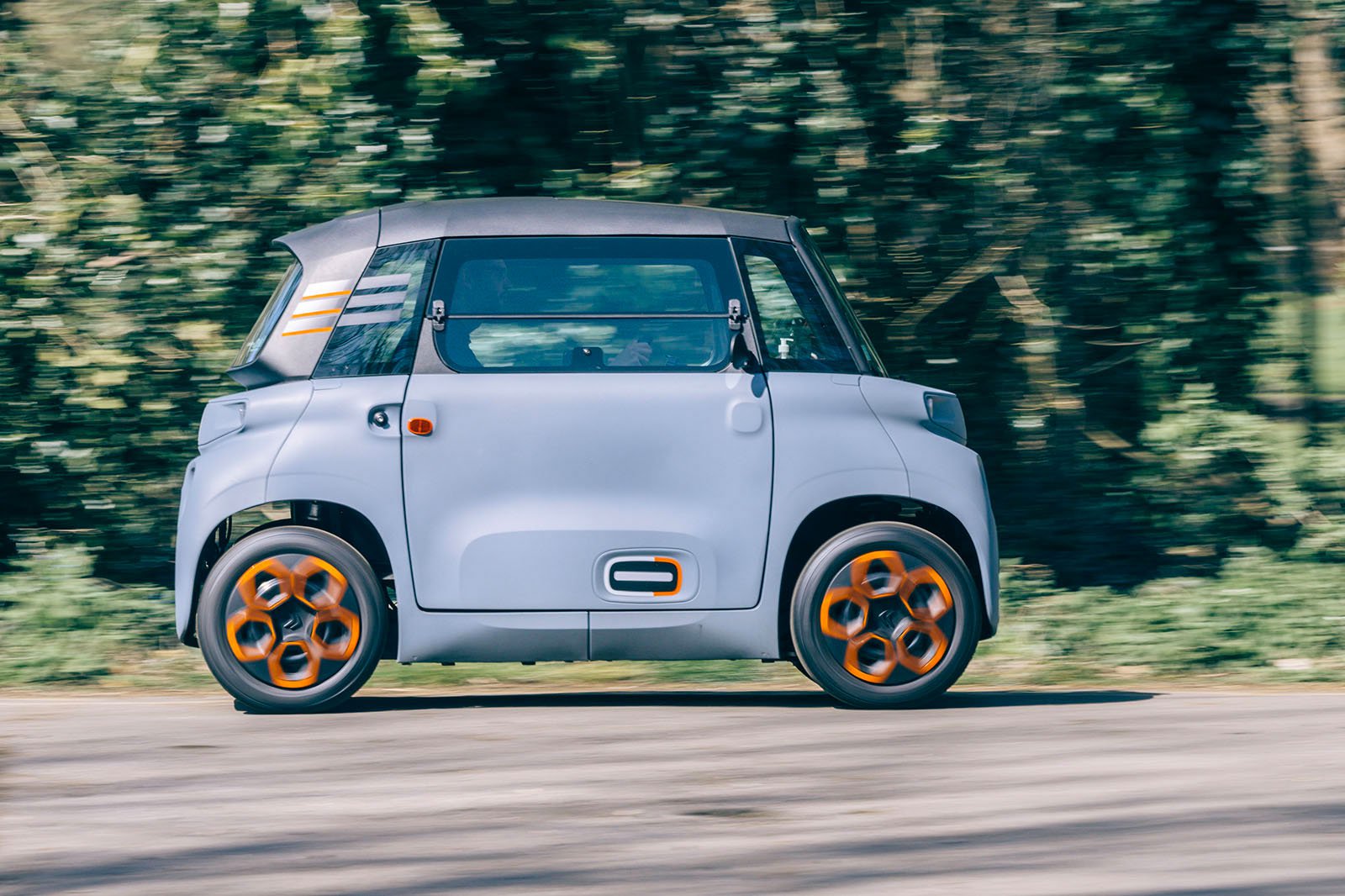 Every rational assessment of the Ami has to be balanced by its price and intended use – which is a reasonable way of saying that any ‘traditional’ car driver will find that the experience behind the wheel is, in many ways, massively compromised.

The driving position and controls, from pedals to wheel and handbrake, are all as you’d expect (electronic gear selector down to the side of the seat aside), but the performance of the Ami is inevitably rudimentary.

Its electric motor generates just 8bhp, so it’s not fast. The relatively low weight and the instant availability of that power means you can still zip out of junctions in town with relative ease, although you’ll soon find that 28mph limiter. 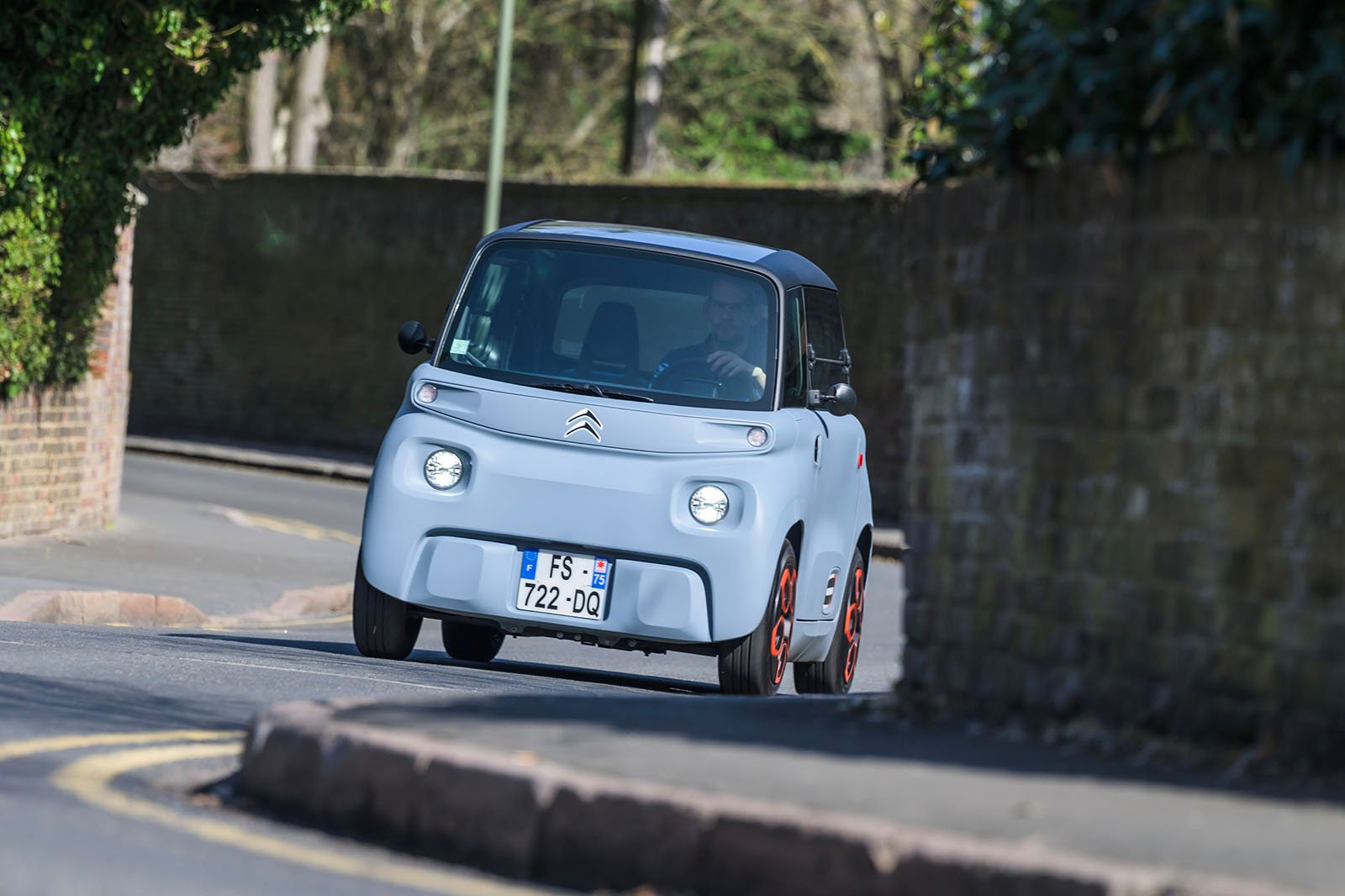 Just how constraining that seems depends on where you’re driving. We found it fine in a congested city and traversing the many 20mph zones that are cropping up. On a 30mph road, though, it was hard not to feel like a nuisance, and on a 40mph road you feel positively exposed.

Visibility, though, is terrific. You sit high, are surrounded by windows and are very aware of where the corners of the car are. The steering is direct enough to make the Ami alert, and darting in and out of traffic is no problem. Sharp manoeuvres are a breeze too, with the tiny 7.2m turning circle making light work of even the tightest situations. Its length (or lack of it) opens up the possibility of parking front or rear in to kerbs. We took a learner driver out in the Ami, and they found its simplicity beguiling.

Inevitably, the ride is firm, but not awful if you remember to avoid big potholes and pimples. However, the noise coming in off the road (both from the tyres and the comments of other road users) is significant. 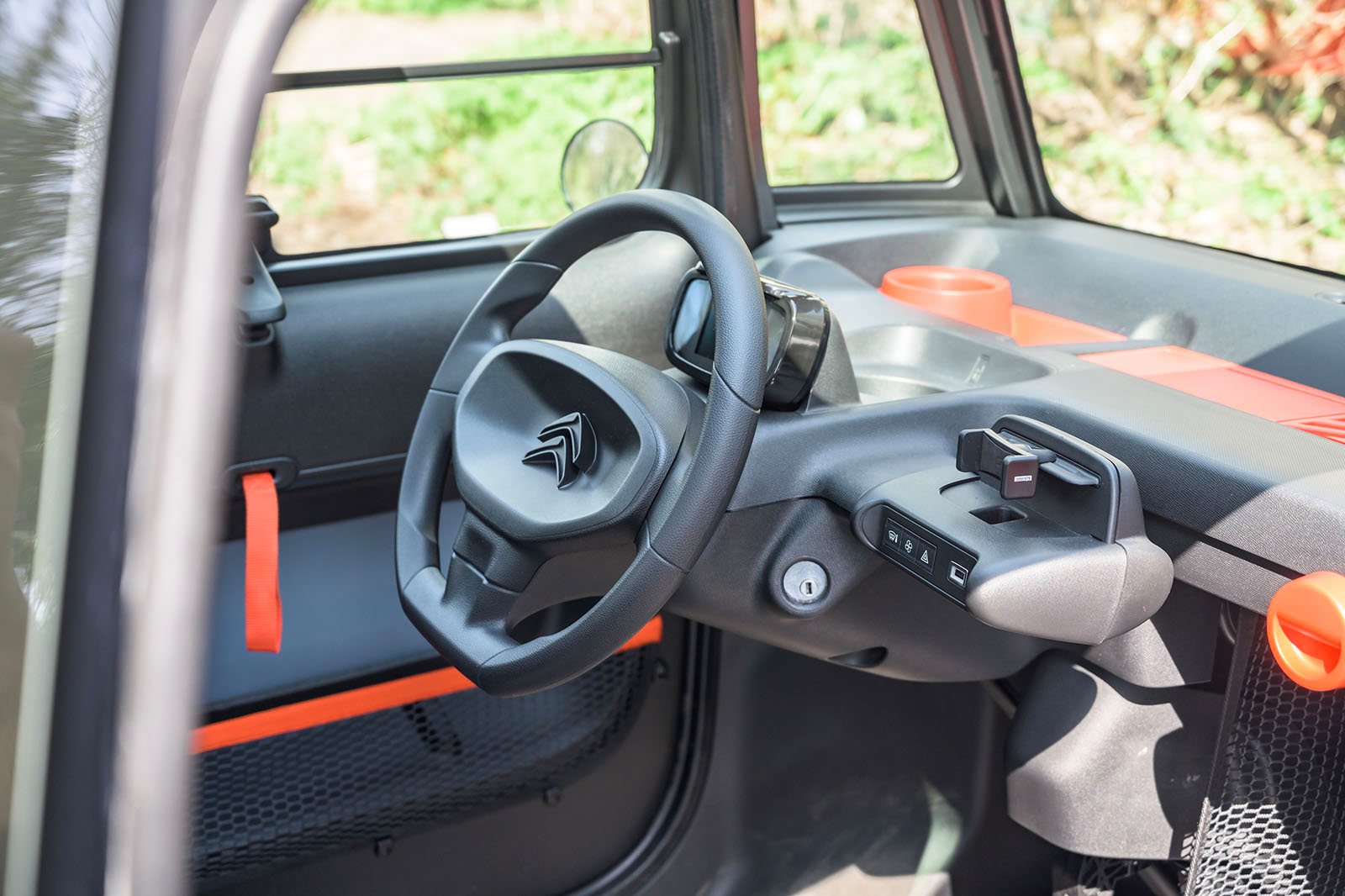 Access is with the key-operated lock, which you twist then give a hefty shove. Amusingly, the driver’s door is rear-hinged so that identical doors can be used on either side of the car to keep costs down. As with the exterior, the minimalist nature of the interior is offset by the charm of its design, which appears to be at least in part inspired by Duplo, the Lego bricks for younger children.

The fact that you open the doors by pulling on durable material straps rather than having anything as obvious as a handle gives you an idea of how design has been employed to reduce parts, and therefore cost.

The Ami is remarkably spacious considering its compact dimensions and, because you sit high and straight, it’s reasonably easy to get comfortable. Storage space is limited to a small cavern behind the seats and the reasonably generous room in front of the passenger’s legs. Combined with the car’s height and an abundance of storage cubbies in the doors and in front of the dash, it allows you to carry a surprising amount.

Visibility is good, too, although the 2CV-inspired half-opening windows, which are split horizontally and can be flicked up, could make things feel a bit claustrophobic.

The presence of a thin metal frame around you – not unlike the ones you'd put up for a tent – highlights the safety compromises required if you choose a quadricycle over a car. You are probably safer (and drier) than if you were on a bike, albeit unable to take advantage of narrower gaps.

Next: Citroen Ami verdict and specs >>