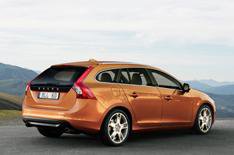 This computer-generated image gives a good idea of what next year's Volvo V60 estate will look like.

Following the new S60 saloon, which hits UK roads this summer, the V60 will plug the gap between the Ford Focus-based V50 and S80-based V70.

The V60 will be a more comfortable competitor for the likes of the Audi A4 Avant and BMW 3 Series Touring the V50 is just too small to take on these rivals.

Engines
Up to eight engines will be on offer if all of the units from the S60 are adopted. A 114bhp 1.6-litre DRIVe diesel model should be able to offer more than 60mpg on the combined cycle and emissions of less than 120g/km.